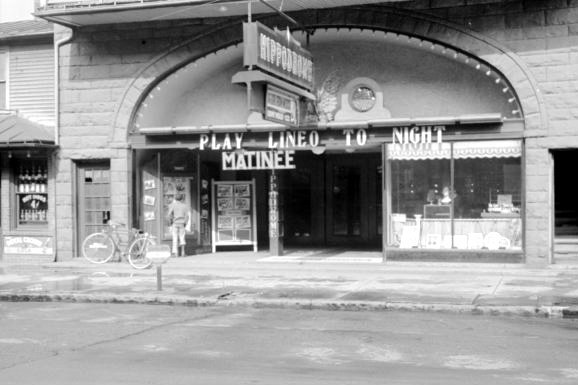 The Hippodrome Theatre was opened prior to 1941 and continued to operate until at least 1950.

I don’t think we’re showing the correct address for this theater. 201 Davis is the corner building, with the intersection to its left as your face it, and the photo of the Hippodrome shows a building to the left. Sources on the Internet indicate that the Grand/Manos Theatre was only a few doors south of the Hippodrome, and the Manos building is still standing at 205 Davis Avenue, as is the building at 209 Davis.

The address of the Hippodrome must have been somewhere from 213 to 221 Davis. The entire north end of the block is now occupied by a modern bank building (229 Davis) and its drive-up teller facilities, so the Hippodrome has been demolished.

A history of the First Ward School in Elkins names the Grand and the Hippodrome among the town’s movie theaters in the 1910s. It also mentions houses called the O-Kay Theatre, the New Avenue Theatre, and the Posten Opera House, but doesn’t say whether or not the Opera House ever showed movies. Another source mentions a Casino Theatre at 3rd Street and Kerens Avenue, and another says there was an early movie theater at 214 Davis Avenue. That last might have been either the O-Kay or the New Avenue.

The Hippodrome and the Grand were both mentioned in the January 28, 1922, issue of The Film Daily which said that they had been bought by a circuit headed by M.E. Hymes and R.H. Talbott. The October 23, 1941, issue of the same publication said that L.E. Talbot had dropped the Hippodrome at Elkins from his circuit, and it would be taken over by the Elkins Theatre Company, operators of the Manos Theatre. The 1967 Film Daily Yearbook lists both the Manos Theatre and the Elkins Theatre as still being operated by the Monessen Entertainment Company.

It remains impossible to reconcile the vintage photo, depicting the Hippodrome, with the address 201 Davis Avenue. That address has a very old brick store building bearing no resemblance to the theater building in the photo. Even combined with the building next door, adjacent to the Manos Theatre, I don’t see how the structures at 201-203 could possibly have held a 648-seat theater, even if they shared a common wall all the way back (which, per the satellite view, they don’t.)

But this photo, though small and a bit blurry, reveals the location of the Hippodrome to have been up the block from the Manos, not down the block, with the address probably being no lower than 211 Davis. The horizontal sign with the theater’s name can be made out, just barely, and the balcony seen above the sign in our vintage photo is revealed to be the lower of two such balconies on what was the tallest building on the block.

The Hippodrome last appeared in the FDY in 1957, and in 1958 the Elkins Theatre appeared. The name most likely changed in 1957, though it’s always possible the FDY was late updating the information and it happened earlier (at least they did update it, unlike the address, which they got wrong year after year after year.) As I noted earlier the Monessen Entertainment Company had both the Manos Theatre and the Elkins Theatre in operation at least as late as 1967. An earlier Elkins Theatre was listed in FDY’s in the late 1920s, but that smaller house was located in the Moose Lodge’s building at 112 Davis Avenue.

The 1914-1915 American Motion Picture Directory lists the Okay Theatre at 201 Davis Avenue, so there was once a theater at that address. It just wan’t the Hippodrome.