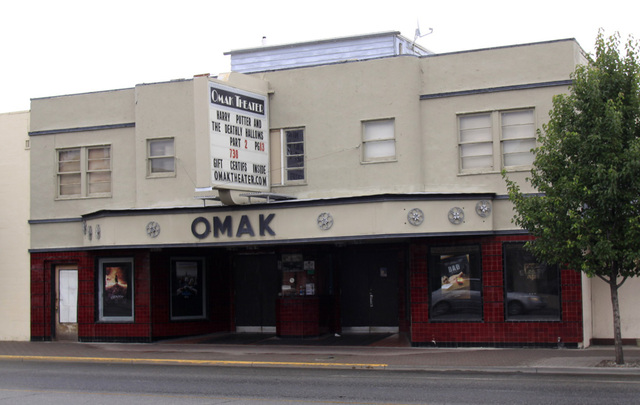 This theatre has been a fixture in Omak for many years. The 425-seat Gem Theatre was opened on June 14, 1928. It was badly damaged by a fire which occurred in the afternoon of December 6, 1929. Repairs were carried out and the Gem Theatre reopened on January 3, 1930. 40 loge seats had been added to the seating capacity. It was renamed Omak Theatre on July 12, 1939.

On April 1, 1976 under new owners it was renamed Omak Cinema. It has since reverted back to the Omak Theatre name.

A newer multi-screen theatre, the Mirage Theatre, is across the street.

There were apparently at least two theaters called the Omak. The July 15, 1939, issue of Boxoffice reported that the Omak Theatre at Omak had opened on July 12. The owner of the new house was Charlie Grieme (Boxoffice sometimes spells the name Greime), operator of several inland Washington theaters.

An item in the April 10, 1948, issue of Boxoffice mentioned in passing that Charles Greime had rebuilt the Omak Theatre in 1939. The wording suggests that the new theater was built on the same site that a theater of the same name had occupied.

I’ve found a reference from 1929 to a New Omak Theatre as well as a Gem Theatre at Omak. A 1938 Boxoffice item mentions Charlie Grieme as owner of two theaters at Omak, one being the Gem, but no name was given for the other. If the New Omak Theater of 1929 was the theater rebuilt in 1939, the fact that it was called the New Omak then suggests that there might have had been a still earlier Omak Theatre.

Boxoffice provides lots of confusion in its few items about Omak. To add to the complications, an October 26, 1940, Boxoffice item dateline Omak reads: “‘Dreaming Out Loud’ broke all boxoffice records for a Saturday here at the Gem Theatre, which opened two years ago.”

But a Gem at Omak, Washington, was mentioned in an ad in the December 7, 1929, Movie Age, so the name Gem must have been used for two theaters, unless Boxoffice mistakenly called the new Omak Theatre by the name Gem (and was off about how long it had been open, since the July 1939 opening of the Omak was well covered.) It’s also possible that Boxoffice mistakenly called the rebuilt Gem the Omak Theatre in the 1939 item, but that seems less likely.

After a few more searches, I’ve concluded that the New Omak Theatre, no town specified, mentioned in the same 1929 ad that also mentioned the Gem was probably just misread by Google’s search, and the ad most likely said New Omaha. The fuzzy scan of the magazine itself is as difficult for me to to read as it is for Google.

But Boxoffice in 1938 was quite specific about there being two theaters in Omak, both operated by Charles Grieme, and one of them was called the Gem. Unfortunately the 1939 article about the opening of Charlie Grieme’s new Omak Theatre didn’t mention there being another theater in town.

June 11, 1938: Charlie Grieme turns over operation of his two theaters at Omak to his son Will.

The next two are an example of Boxoffice’s left and right hands being ignorant of one another’s actions (even the spelling is inconsistent:)

July 22, 1939, p 78: “Filmrow looked deserted for a couple of days this week when the gang went to Omak to attend the opening of Charlie Grieme’s new house, the Omak.”

Trying to puzzle out from Boxoffice what really happened in this town is a series of WTF moments. What’s clear is that a theater opened in Omak in 1939, and it was probably the one that is now called the Omak. In the photos linked above it certainly looks like something that would have been built in 1939. This theater might have been the Gem rebuilt and renamed, and most likely was.

I’ve found only two mentions in Boxoffice of a Fox Theatre in Omak. The April 10, 1948, item says: “As soon as building restrictions are lifted, the old Red Apple Theatre here will be rebuilt and reopened as the Fox, according to Ike Rodgers, manager here of the Omak Theatre.” (Perhaps Red Apple was an aka for the Red Fox?) And then The May 1 issue the same year has a longer item which says that the old Fox Theatre in Omak was to be renovated and reopened, that it had been dark since 1940, and that it had 300 seats. I can’t find any later mentions of the Fox. Perhaps the project to reopen it was abandoned.

The new Omak Theatre was slated to open the following night, reported the July 11, 1939 issue of The Chronicle, the local newspaper. The house was located on the site of the Gem Theatre, and was the same width as the old building but was 40 feet longer. Owners Greime and Fasken had operated the Gem for seven years before rebuilding.

According to local history and newspaper articles the Gem was originally to be called the Magnolia. It opened on June 14, 1928 with a seating capacity of 425.

On the afternoon of December 6, 1929 the empty theatre was ravaged by a fire of unknown origin which caused interior damage.

On Jan 3, 1930 the renovated and redecorated Gem reopened with the addition of 40 loge seats, upgraded sound proofing and a “talking pictures exclusively” policy.

The name was probably changed to Omak Theatre on the date in the introduction.

Larry and Mary Lassila bought the theatre on April 1, 1976 and changed the name to Omak Cinema.

In 2004 they also opened the Mirage Theatre across the street in the former Brownies Building.

At some point the name went back to Omak Theatre.