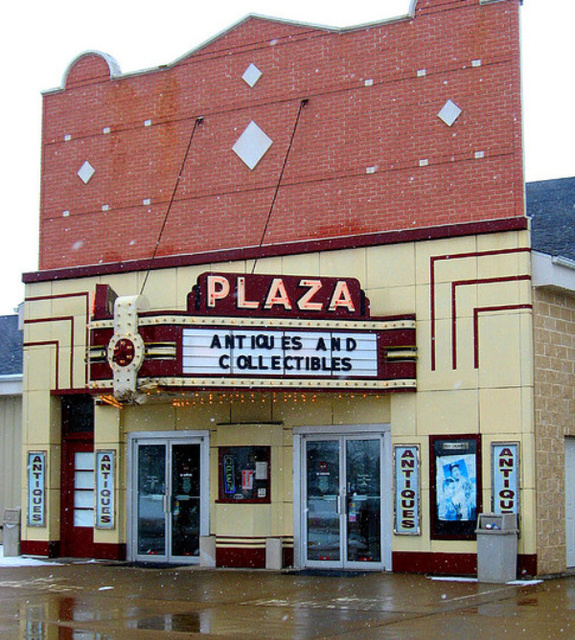 The marquee, ticket booth, doors, and facade from the Plaza Theater were saved and installed on another building at a different location. That building is home to the Plaza Antique Mall.

The Plaza theatre was a landmark in Dyersville, Iowa since 1915.

Much of the movie “Field Of Dreams” (1989) was filmed near Dyersville and in the town of Galena, Illinois, which “doubled” for the town of Chisholm, Minnesota.

In the film, the Ray Kinsella character (played by Kevin Costner) sees a PLAZA theatre marquee displaying “The Godfather” while taking a late night walk. That scene was filmed outside the former Stanley Theatre at 113 S. Main Street, Galena, IL 61036. The Stanley had long since been closed by the time “Field of Dreams” was being filmed, so a “temporary” marquee was applied to that building in Galena. Interestingly, the PLAZA marquee in the film looks to be identical to the Plaza marquee in Dyersville!

By 1997, the Plaza theatre (and hotel) in downtown Dyersville was slated for demolition. A deal was negotiated and the 1955 period façade of the Plaza (including the marquee, ticket booth and doors) was rescued from the destruction of the downtown site, refurbished and re-installed nearly two miles away as the new entrance to the Plaza Antique Mall at 1235 16th Avenue Court SE, Dyersville, IA 52040.

The front façade panels are made of porcelainized steel and fitted together with some precision. One account says that over half a mile of wiring, 280 light bulbs, and 500 man-hours went into saving the Plaza theatre façade!