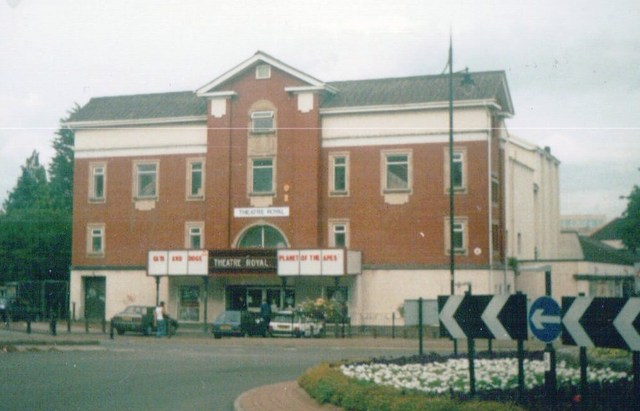 The Theatre Royal and Hippodrome opened in 1907, was designed as a live theatre by architect W.E. Knapman.

It burnt down in November 1909 and was re-built on a new site across the street, to the plans of Winship & Knapman. It has a red brick and stucco facade in a classical style, with a taller pedimented centre section. The theatre was equipped with an orchestral organ manufactured by Messrs Nicholson of Worcester. Famous actress Lillie Langtry appeared at the Theatre Royal in 1918. In 1929, it was converted into a cinema and re-named Royal Super Cinema. The auditorium seating was re-configured into stalls and a single balcony with a total capacity of 1,980. The proscenium was 40 feet wide, the stage was 25 feet deep and there were 12 dressing rooms. There was also a cafe for the convenience of patrons. In May 1940 it was closed and remained so until after the end of World War II. In the 1944 and 1947 editions of the Kine Yearbook, it notes that some re-building was occuring. A false ceiling was added and original decorative details were covered over. This included original decorations of painted scenes and trees being painted over and a new coved proscenium arch being built. Seating was now provided for 915.

In the 1980’s the circle was closed off and the screen brought forward. Then in the 1990’s a second screen was created in the former stalls. The two screens seated 300 and 233.

It was announced in late-February 2008, that the Theatre Royal was closing on 10th April 2008. There was strong local opposition to these plans, but they went ahead, the final film shown was Peter Sellers in “The Smallest Show On Earth”.

The Theatre Royal was demolished in August 2012.

Here is a recent news article about the closing:
http://tinyurl.com/3fafsp

As part of a local initiative to raise support for re-opening the Theatre Royal,an exhibition about the cinema’s history was staged during April 2010.
Among the exhibits were posters, programme details and old correspondence, together with photographs of long-hidden parts of the building.
Press extracts included details of the building and opening in 1910 and subsequent changes of ownership from Arthur Carlton to O'Connor(1930)then the Barton Cinema Company ( part of an unspecified larger local cinema circuit)and the final owner, Brian Bull’s Circle Cinemas.
Also confirmed was the period of closure during World War II, from 17 May 1940 re-opening on 3 June 1944.
In the pre-1930 period, stage shows were an important part of the programme, and relics of this period were revealed in the currently closed building, early moving pictures on the “Universal Animatograph” were advertised in June 1911.
As was common at the time, a new “wide screen” was advertised in January 1954.
(The exhibition is on till the end of the month in the Pavilion in Victoria Park in the Cadoxton area of Barry.)

The Vale of Glamorgan Council have approved plans to demolish the Theatre Royal for the building of retirement flats, despite the efforts of a local campaign to save and hopefully reopen the cinema building.

Demolition contractors have completed their work. It is not known whether any more relics and memorabilia were salvaged.