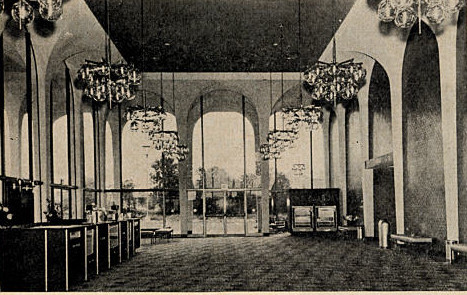 This was a two screen theater located in the ritzy area of North Dallas. It was located near Yale Boulevard along Central Expressway. It basically showed art house and foreign films all through the 1970’s and 1980’s, when I lived in Dallas (until 1986). I know that “Diner” played there, I think “Das Boot” played there and many art house type films, including “Dona Flor and her Two Husbands”.

In the late-2000’s, SMU University, bought the theatre to use for more buildings or parking for the University and the theatre was demolished.

I would love to see a movie on a curved screen just like this one!

Earnie Hackney was the first general manager and his wife Betty was in the box office his kids worked as ushers and the candy girls were his daughter and my sisters Kathy and Karen Sutton . I saw every show played at the Cine and was hired when I turned 16 and worked many years since off and on but total 25 years with United Artist and Regal theaters . Met my husband and many good friends working at the Cine . Saw a few movie stars and football teams . They had many film premiers with champagne and open concessions with movie stars and film big shots of the day .. Many good memories of great classic films,movie stars , and the people that made it all possible to watch the Big Screen ! Love with fondness this particular theater and many were sad to see it demolished . What a shame for the once first biggest curved screen movie house in Dallas . – Linda S.

Two Assistant Managers I worked with at the UA Prestonwood later went on to be GMs here. Michael Graham in 1985 and Steve Wilcox a few years later. An employee from here, Bob Pinson, later worked with me as a junior Assistant Manager at the UA Northstar 8 in Garland. He was a real goofball. I have one question about the Cine. Who was the genius that decided to build a open toilet in the projection booth? The booth was multilevel. And if you walked out of the office and looked down the booth and someone was on the toilet. You just saw the toilet goer’s head sticking up above the floor. A female Assistant and myself came over after closing one night to watch a screening and were shown upstairs. And were walking by the projector for the number 2 house (the small one). And I see Mike Graham’s head sticking up and he yells out “Stop!” The night got worse after that. The movie we screened was “The Golden Child”. Horrible.

As I recall, I saw the Bond flick ‘Live and Let Die’ at the UA-Cine in the summer of 1973 with my then girlfriend. I do remember it was a nice theater.

Matt54 above is correct…the theater was never in a shopping mall. When I saw that pic at the top of the page of the theater lobby, it really jogged my memory of being there in the 1970’s…wow, long time ago.

This was the place to see art house films when I was coming up in Dallas. I think the last film I saw here was Fear And Loathing In Las Vegas with Johnny Depp and Benicio Del Toro.

I visited Dallas a lot when I was younger and I LOVED visiting the Cine. I saw “Leaving Las Vegas,” “The Sweet Hereafter,” “Tumbleweeds,” “Cold Comfort Farm” and others there. I really miss how BIG this theatre felt.

Fiddler on the roof promo https://youtu.be/LgnJChP-5yM

Here’s a new 4-page 50th anniversary FIDDLER ON THE ROOF retrospective featuring a roadshow playdate chronology and historian Q&A. This cinema’s run is mentioned in the piece.