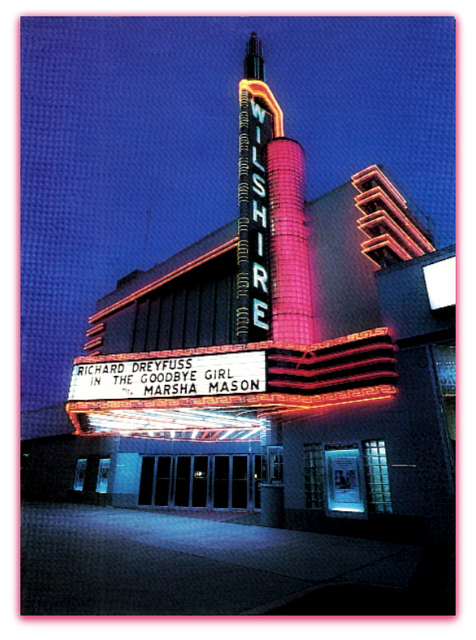 Located on the south side of E. Mockingbird Lane, three doors down from the corner of Skillman Street. The Wilshire Theater was opened on October 4, 1946. It was demolished in 1978.

The Wilshire was a lovely theater right up until its death. Always ran first-run pictures, always a good presentation, always a good and attentive staff – just the epitome of what a dignfied single-screen walk-in should be.

In a way, it’s a shame the current market will not support a resurgence of such a theater as this was – that all we can hope for in new construction is the multi-screen megaplex where the sound from the latest action/s-fx blockbuster bleeds through the wall into the auditorium showing a nice dialogue/character-driven film.

When the $1,000,000 Park Lane Shopping Center was proposed by Corrigan and Caruth in 1941, they couldn’t have foreseen WW2 which would delay the project until approved by the War Production Board in 1945. The proposed 1,200 seat $200,000 Lane Theater within the Park Lane Shopping Center would start construction as the Lane but be changed during construction from the Lane to the 832-now wider cushioned seat, $200,000 Wilshire Theater within the Wilshire Shopping Center. The decorative floral murals were by Eugene Gilboe (sometimes Gilbeau) who would do the murals in the Circle, Forest, Esquire, Inwood, and Baker Hotel within the next 12 months. The Wilshire was so named for its neighborhood of Wilshire Heights.

Interstate Theater Circuit opened to the public after an invitation screening on Oct. 4, 1946 with fireworks and the South’s first demonstration of television. The Wilshire stayed in the Interstate portfolio as a single-screen auditorium during its entire operation from Oct. 4, 1946 and the feature “Rendezvous with Annie” to April 23, 1978’s final showing of “Casey’s Shadow.”

The Wilshire had the live quiz game, “The Bank of Knowledge” to compete with the radio and soon the television quiz game craze in 1948. In the mid-1960s, when some suburban houses began to falter and turn to pornographic and art films, the Inwood, Village and Wilshire were booming. Following the success of the “Sound of Music” road show at the Inwood, and with the Village positioned as the Disney theater, the Wilshire hosted its first ever road show in 1966 with “The Blue Max.” The success of these theaters inspired General Cinemas to open its NorthPark cinema in Oct. 1967, the UA Ciné which opened early in 1968, and the Medallion in 1968 forming the Central Zone that would supplant downtown as the place to see first-run films in Dallas.

The Wilshire didn’t cower with the new competition within two miles of its doors. It continued with a Dr. Doolittle road show complete with a circus tent, appearance by Chee-Chee the chimp from the film, and a half hour television special aired on TV-11. Doolittle would play four months at the Wilshire followed by a road show reissue of “Ben Hur.” The Wilshire was on a roll with another road show of “Paint Your Wagon” with Ray Walston in attendance, “Song of Norway” did its road show there as road shows were winding down nationally, an appearance by Julie Andrews with “Darling Lili” drew fans, and the theater was getting major test showings of films prior to release. In 1968, the theater got threatening phone calls for showing “Guess Who’s Coming to Dinner.”

As the twinning era was in vogue in the mid-1970s, the Wilshire stood firm as a single-screener and had successful runs with films including, “A Clockwork Orange,” “Murder by Death,” “All the President’s Men,” “The Deep” “The Goodbye Girl” and its #1 box office champ, “The Exorcist.” But Pearch-Christian real estate and Interstate both knew that the land at Mockingbird and Skillman was much more valuable than trying to extend the life of a 32-year old theater even though it was profitable during its entire run. In April of 1978, the ABC Interstate theater didn’t extend its lease and the Wilshire closed after the April 23d showing of “Casey’s Shadow.” And on January 23, 1979, the theater was demolished along with the rest of the 54-year old shopping center that had housed the neighboring Wilshire Cleaners, Wilshire Pharmacy, Wilshire Radio & Television, Wilshire Hardware, et al and replaced by a gas station that as of the 2010s was still in operation.

This theatre was replaced by a Kroger grocery store—-which after a number of years was closed and the space used for other retail.