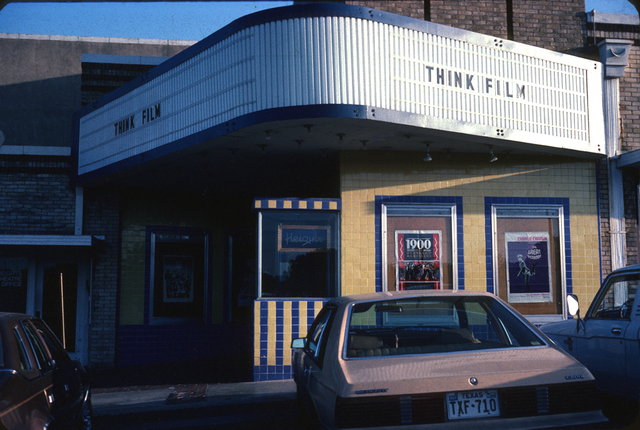 The Heights Theatre was opened November 23, 1947 with Felix Blanchard in “The Spirit of West Point”. On February 26, 1960 it was renamed Capri Theatre. Later presenting adult movies and then Spanish language movies. It was last renamed Borzoi Theater, screening foreign art house movies from April 15, 1977 until December 31, 1977. It ended its life as a run down, old theatre when I saw it around 1979-80. It had reverted back to its original Heights Theatre name. They showed double bills of classic movies.

This theater, based on a local newspaper ad, was located at W. Freeway and Clover Lane in Fort Worth. I do remember it being just off a Freeway.

It looks like a freeway offramp runs right through the former location of this theater.

Yes, I remember when this theater was torn down when they were widening the freeway. There was quite a few buildings in that side of the freeway that are now gone. If I can find it, I still have a piece of the blueish tile that was part of the facade of the building.

The reason for the name, more than likely, was due to it being in a suburb called Arlington Heights, just West of Fort Worth.

My family operated the Heights from the early 1980s until it was demolished to widen the West Freeway. The theater opened in 1939, ad the Heights Theatre, and later operated as the Capri, and the Borzoi. When we took over the operation, we went back to the original name. WE ran classic films, foreign films and special features, including small-scale film festivals. For many years, the heights offered an alternative for a large group of loyal patrons, at very low cost. We never made much of a profit running the place, but it kept another fine little theater going for a few more years.

I grew up in the fort Worth suburb of Arlington, I had gone to the Heights theater in the 1950s.I had fond memories of seeing old films such as Buck Rodgers science fiction serial showings each week! This was my first introduction to Science Fiction that placed me on the path to reading it for life. I had moved away from Fort Worth in the late 60’s, and was sad to find out it was torn down to make room for the re-vamped Highway 30.This place and the corner drug store, with its great soda fountain & the paid record machine of which my older sister and I played Chuck Berry & Jimmy Reed songs. Those were great simpler times we had lived in. Thanks for the memories!!

I remember this theater well. It was very important to me from around 1978 to 1981. Still living at home, I would drive in from Bedford to sit in the “balcony” (if there weren’t too many smokers) and allow “The Heights” to widen my cinematic horizons. I can’t tell you how many classic and foreign films I first saw there. It was definitely at the Clover Lane exit. I remember buying a punch pass that got you 10 movies for the price of 8, or something like that. I was at college when I read that the Heights was showing its last film, “Gallipoli” I think it was. I still regret not making it back to say goodbye. Samaustin, I still have a picture in my head of the man who would most often take my ticket or punch my card, presumably you, or a family member. Thanks to you and your family for enriching my life.

This opened on November 23rd, 1947. Grand opening ad in the photo section.

The Borzoi Theatre replaced the Capri as a repertory, double feature house launching April 15, 1977 with “8 ½” and “Cassonova ‘70.” The short-lived effort closed December 31, 1977. On April 21, 1978, the theatre relaunched as a repertory house under its original name, the Heights Theatre.

W.C. Austin gave it a run with “Gold Diggers of 1935” and the original “King Solomon’s Mine” on a double bill. The popular theatre had a productive final four months in 1983 hosting the public radio show, “A Prairie Home Companion,” hosting the University of Texas at Arlington (UTA) Student Film Festival and having a high-profile charity film screening as one of its final shows. The Heights finally closed on May 8, 1983 The Heights sent theatre seats to the Ritz in Austin prior to its demolition in 1983. It also put the words, “Think Film” on the marquee for its demolition for the West Freeway expansion.