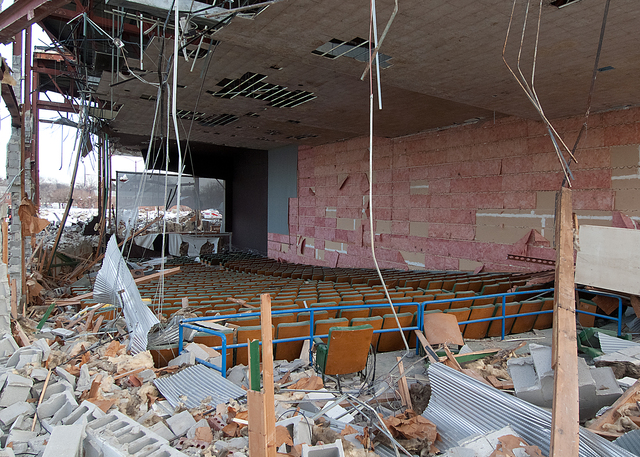 The Showcase Toledo opened in December 1964 with twin screens seating 705 & 1,100, premiering one of the year’s biggest hits, “Mary Poppins”. It added a 1,140-seat auditorium, one of the biggest in the National Amusement chain, and subsequently the two original screens were divided to make five.

The theatre was closed on May 5, 2005 and was converted into retail use. That day also marked the closing of Franklin Park Cinemas.

The Showcase Cinemas Tolado was demolished in December 2010.

I’ve never had a chance to see what the inside of those big screens looked like, nobody ever took pictures while they were still operating. So it makes me sad that the first time I’ve seen inside, they’re being demolished.

The installation of a Cinerama strip screen at the Showcase Cinema Toledo was not a “coincidence.” According Sharon Redstone, daughter of the chains father, Sumner Redstone, Showcase Cinemas, in their earlier years, deliberately installed louvered Cinerama screens (built by Hurley Screen which built most of them – and still can if you can afford one) in a number of their early twin and triplex theaters and had an agreement with Cinerama to be an exhibitor.

Also, in regard to another comment, I may be wrong, but I don’t recall this theater ever been used for retail; from the theater’s closing until its demolition, I was in Toledo several times staying at a hotel just a few yards up Secor Road, and during that period it just sat there, boarded up. There was a plan to incorporate it into a new retail/shopping complex, but nothing came of that. The demolition photos show clearly that the auditoriums at least weren’t converted to anything but rubble.

The original opening features as a two screen operation were as follows: Cinema 1 “The Outrage” with Paul Newman, Cinema 2 “Send Me No Flowers” with Doris Day. Saw both of them there.

The Showcase complex was indeed vacant and unused up to the time of demolition. It remains vacant although I do recall seeing a “sold” sign on the for sale sign. Of note the Super Cinema complex at Spring Meadows has been sold and they are going to demolish it for a furniture store. It was a"shoebox cinema" with small auditoriums and flat screens. I am guessing that the curved screen at Cinema 1 was curved to approx. 120 degrees for 70mm TODD-AO, Super Panavision etc. According to Stanley Kramer who directed It’s A Mad Mad Mad Mad World the film was marketed as a “Cinerama” film and filmed in Ultra Panavision…he said that they had trouble trying to make it fit on some Cinerama screens and was not impressed with the fact that they promoted it as a Cinerama film when in fact it wasn’t.

I remember going to the sneak of E.T. when Universal showed it with DEAD MEN DON’T WEAR PLAID. The theater was packed and we had to go in halfway through the Steve Martin movie if we wanted good seats. It was in the big theater and we managed to score terrific seats about 1/3 from the front and in the center. Before it started, people were chanting “E.T.! E.T.!” But before it ended, those same people were crying their eyes out and cheered at the end. This was one of the best big screen theaters from my college days at BGSU in Ohio, and I am sad to see that it is gone.

The seating capacity needs to be updated. The original Cinema I & II seated 1,805 (705 and 1,100.) The addition of the 1,140-seat third auditorium in 1967 brought the total to 2,945. I don’t know if any seats were lost when two auditoriums were later divided to make this a five-screen multiplex.

The entire area around and including the Showcase Cinema complex had changed dramatically. Two hotels, retail space now occupy the former cinema site. The former Ramada? Hotel was demolished with plans to build yet another hotel. This will only make an existing traffic problem worse for commuters. Have you ever driven on Secor Rd near the interstate at rush hour?