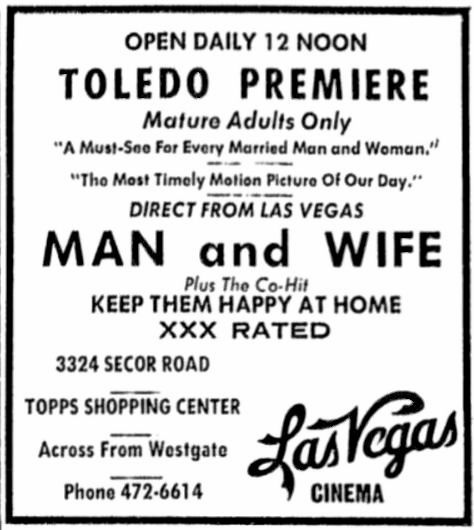 The Las Vegas Cinema opened on November 16, 1971. It was an adult theater which ran 16mm movies. The owners were Henry and Gene Cartwright who were from Las Vegas, NV. They owned Las Vegas Cinema Inc., which ran a circuit of 19 adult theatres around the country. They also owned Cinema Arts Theatre and the Modern Cinema in Toledo, OH.

On August 17, 1972, The Toledo Police “Morals” squad detectives and city prosecutor Sheldon Rosen closed it down after watching parts of two allegedly obscene films. They confiscated the films “Love Art” and “The Sensualist”. Charged with presenting an obscene performance was the theater manager and ticket taker. In the 1970’s-1980’s it was common with the adult theaters and book stores in the Toledo area to get raided when it was getting close to election time. The Las Vegas Cinema finally closed on Oct 14, 1987.