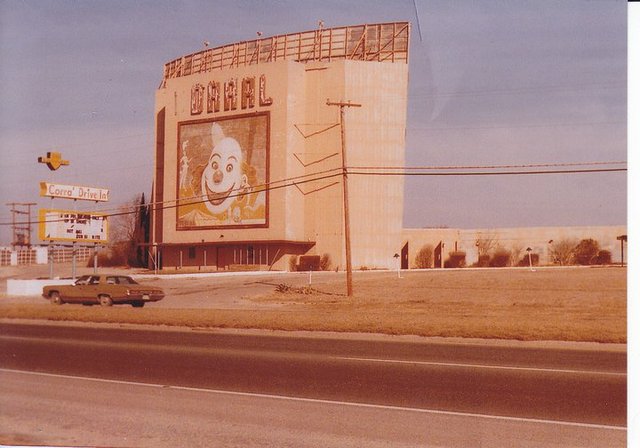 The Jacksboro Drive-In opened in December 21, 1949 with Alexis Smith in “One Last Fling”. It had 500 seats in a heated indoor seating area for use in the winter months. It was operated by Claude Ezell and Associates and on March 10, 1955 it was renamed Corral Drive-In. It closed in 1979.

Here is an aerial view circa 1970:
http://tinyurl.com/yd8jesp

Yes, it should, Lost Memory. Hopefully, it can be corrected soon.

The Corral was originally opened as the Jacksboro on December 21, 1949. The name was changed either in 1954 or 1955, but what didn’t change was the large clown’s head/circus mural on the screen tower. It was likely the work of Mr. Reed Hubnell, who painted similar murals at other drive-in theatres throughout Texas.

The site is now occupied by a shopping center.

Here is the clown. The site also has an ad for the Jacksboro at the time of opening.
http://tinyurl.com/y9xmutn

Thank you, ken mc. I have that same photograph in my collection, along with another similar one.

I’m VERY interested in seeing that other photograph on that website you provided, but a MUCH larger version! From what I can make out, that’s the way I remember the Corral’s screen tower back in the ‘70s. I also seem to remember the font used was similar to one called Futura Display. An example of it can be seen here:

An approximate date for the renaming comes from the April 16, 1955 issue of BoxOffice:

FORT WORTH, TEX. – The Corral Drive-In, which is the former Jacksboro Drive-In doubled in size and with everything made new, held open house recently. Everybody was invited to see the first show free.

Billboard, Sept. 27, 1952: “L. Lipscomb, manager of Jacksboro Drive-In, Fort Worth, estimated damage to the theater at between $35,000 and $50,000 as the result of a freak windstorm. The top of the screen, made of concrete blocks, was whisked away like straw. The corrugated iron fence surrounding the drive-in was found scattered over about a three-square-mile area. Some parts of the fence were found wrapped around the loud-speaker posts on the ramps. Lipscomb also reported that the walls and roof of the concession stand also were demolished.”

Reopened on March 10th, 1955 as the Corral Drive-In as the largest drive-in in Texas. Grand opening ad posted.