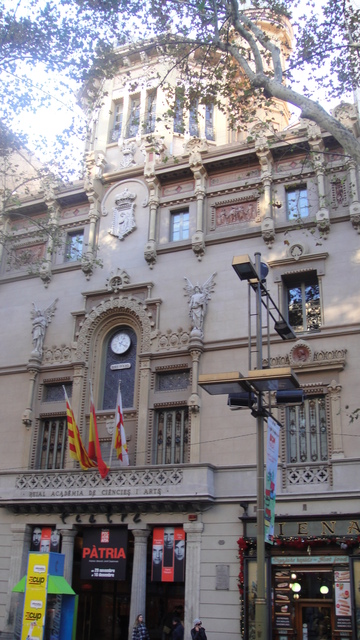 Located in the centre of Barcelona on the Rambla, the Cine Marti opened on 13th April 1899, being I believe the first purpose built cinema in the city. One of the successful films to play here was Georges Melies "Joan of Arc" on 16th October 1900. However the Cine Marti was closed in 1903.

It was re-furbished and re-opened as the Cine Poliorama on 10th December 1906 with a seating capacity of 630. Both the exterior and interior of the building were highly decorated with flowers and other ornamentations by designers Moragas & Alarma. It became used as a theatre and cinema.

On 24th December 1937 it became a live theatre and the name was changed to Teatre Catalia de la Comedia.

After the end of the Spanish Civil War it was taken over by the Balana group and re-opened again with the former name Cine Poliorama, on 25th February 1939. The most successful years of cinema use were from 1953 to 1963.

It was closed on 11th August 1963 for re-furbishment and re-opened in October 1963, when some mixed cinema and theatre use began. From 1976, it went over to live theatre use only, being re-named Teatre Poliorama under the direction of Alfredo Matas. This lasted until 13th June 1982 when it was closed.

The Teatre Poliorama re-opened under new management on 3rd February 1985 and with a new slightly increased seating capacity of 671, produces mainstream comedies and musicals, occasional serious dramas and childrens shows. Since 1996 it has been formed as part of the Reial Academia d'Arts i Ciencies (Acadamy of Arts & Sciences).

A night-time view of the Teatre Poliorama in December 2007:
View link