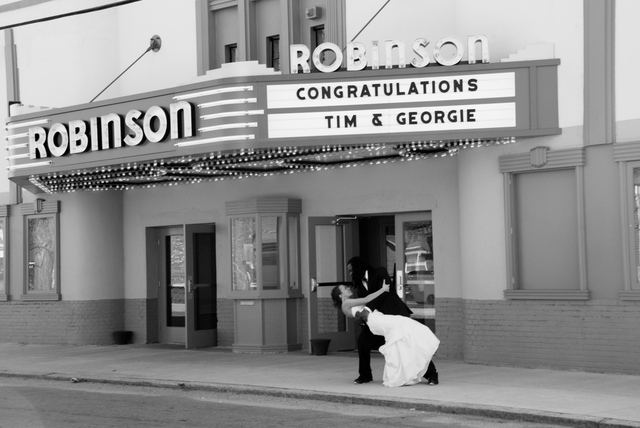 The Robinson Theater opened on September 29, 1937 with Bill Robinson in “One Mile From Heaven”. The theatre was named after Bill ‘Bojangles’ Robinson, but he was unable to attend the opening ceremony (his co-star Fredi Washington appeared in his place). Bill Robinson did appear in person a few days later, and in a second ceremony, had his footprint and signature enscribed in the concrete, beside the ticket booth. A plaque beside the entrance honored ‘The World’s Greatest Tap Dancer’. The original seating capacity was for 597.

The Robinson Theater was described at the time of opening as having ‘cream California stucco with a black alberene base, trimmed in a modern design of midnight blue. There was a dazzling neon marquee. The interior decoration is strictly in the 'Moderne’ motif, the side wall treatment being four shades of rust with a background of peach'.

The Robinson Theater was built for and operated by Abe Lichtman, a film exhibitor who operated a chain of theatres catering to the African-American populations of Washington DC, Norfolk and Richmond.

The Robinson Theater was closed in around 1956 and converted into a pool hall. From around 1960 it was used occasionally for community performances.

In February, 2009, a historic renovation of the Robinson Theater was completed, and the theatre is set to have a Grand Reopening on 21st February 2009.

Here are some 2009 restoration photos:
http://tinyurl.com/nt3ftk