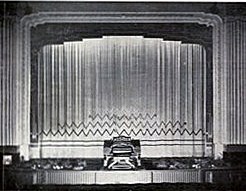 Located in Kidderminster, Worcestershire. The Central Theatre opened on Monday 5th October 1931 at 2.30pm. The theatre was opened by the Mayor of Kidderminster Alderman W.H. Stewart-Smith J.P. The first movie to be shown at the theatre was, "Monte Carlo" starring Jack Buchanan and Jeanette MacDonald.

The directors chose for the theatre a Christie 3Manual/10Rank organ which was installed by Messrs. Wm. Hill & Son and Norman & Beard Ltd. The console was placed in the centre of the orchestra pit on a lift, whilst the organ was to the right hand side in two specially constructed chambers, the area being occupied amounting to some six hundred square feet. The organ chambers contained two thousand wooden and metal pipes up to sixteen feet in length. The instrument also boasted, ‘every kind of drum, a beautiful set of cathedral chimes, a glockenspiel, a xylophone and a set of synthetic carillons’. The console was finished in polished mahogany with gold-bronze mouldings. The first organist at the Central was T. Guy Hindell F.R.C.O. He was an established and well respected organist having trained at Rochester Cathedral and obtained various church appointments and was an Oxford Scholar. He played at well known theatres including the Oxford Super Cinema; Plaza Cinema, Maidenhead and occasionally Finsbury Park Astoria in north London.

In the projection booth the chief operator was a Mr. H. Poncery who had previously been an engineer with the Western Electric Co. Ltd. The theatre had two rear shutter Kalee Super Projectors with high intensity arc lamps supplied by E.A. Langrish and Co. Ltd. of Birmingham. The sound system was supplied by the Western Electric, along with a ‘Westone’ screen which allowed for the passage of sound from speakers placed behind.

The directors appointed Mr. H.H. Carlton as the first manager of the theatre. The directors were a group of well known local businessmen led by Alderman F.J. Ballard. J.P. Ballard had been involved with the Criterion Cinema, Dudley which was sold on to Provincial Cinematograph Theatres Ltd.(PCT). He was also chairman of the Central Theatre at Stourbridge which was a sister theatre to the one at Kidderminster. A third theatre in a similar style was later built at Smethwick.

The frontage of the theatre was symmetrically arranged with a central main entrance protected by a projecting canopy. This was flanked by two retail shops premises. There was an imposing two story crush hall, the terrazzo flooring being a large star pattern with the town’s coat of arms at each of the three entrance doors. Above each entrance door was a magnificent arched window in stained glass with Art Deco geometric designs commissioned from the studio of Thomas William Camm of Smethwick. The crush hall also contained a pay kiosk, advance booking office, sweet shop and telephone kiosk.

The theatre accommodated 1,290 patrons with 500 in the balcony. The balcony staircase landed patrons at a level half way up the balcony rake. The auditorium was fan shaped on plan and the seats in the balcony all had hat holders underneath. The directors described the treatment of the building to be ‘Modern’ with a touch of ‘the Spanish Renaissance’ in the auditorium. The whole scheme was the work of chartered architects Webb & Gray whose work had been exhibited at the Royal Academy. The fibrous plasterwork decorations were the work of J. Mallin & Co of West Bromwich.

The Central Theatre was taken over by Associated British Cinemas(ABC) in November 1935 and was re-named ABC on 27th January 1964. It was closed on 19th February 1972 for sub-division into a a smaller 484 seat cinema in the former balcony which opened on 1st June 1972, and an EMI Bingo Club in the former stalls area. It was closed on 1st May 1982 and was demolished in 1983. A retail unit on the right side of the former cinema still stands in 2017, occupied by Mann’s Superstore.

Minor correction. The downstairs was fitted out and ran by “STAR BINGO” This is one of the theatres I usd to cover the Manager for his time off and Holidays while I was with ABC…

In April 2005, the site of the ABC/Central was occupied by a Safeway supermarket.

As of March 2016 the site is occupied partly by the car park of Dunelm Mill, which was previously Morrisons, and a public car park The right hand retail shop still exists!

The gallery photo shows the bingo operating as EMI Bingo, this seams to follow a pattern, as other sites initially have Star Bingo which later changed to EMI Bingo, another example being the Savoy/ABC Exeter.