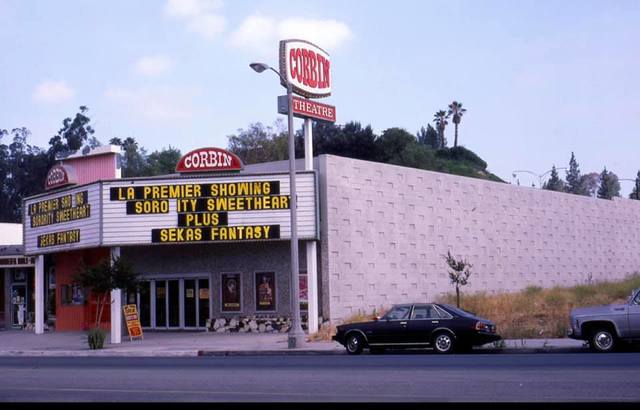 Like the Holiday Theatre in Chatsworth, this theatre was one of those single screen versions of the 1970’s style multiplex. The Corbin Theatre was opened January 14, 1959 with Yul Brynner in “The Buccaneer” & Glenn Ford in “Torpedo Run”. It finished its last years as an adult theatre.

The Corbin was advertised as an EVC Electrovision Theater in the LA Times back in January 1960. The karate studio has some interior photos on its website:
http://www.tarzanakarate.com/

Been There – Done That

Here is an August 1975 ad from the LA Times:
http://tinyurl.com/qrkcqy

The Corbin was built for Robert Lippert Theatres and was opened in 1959. It was a near twin to the Buena Park Theatre opened the same year and which was the subject of this Boxoffice feature of October 19 that year. You can see the resemblance to the 1984 photo, though it looks like the Corbin had a traditional marquee added later, judging from the way it’s mounted on columns rather than attached to the building itself. The Corbin was probably designed by the architect of the Buena Park, Warren F. Overpeck.

The caption of the rendering OCRon mentioned says that the Corbin Theatre was actually designed by Gale Santocono (though it misspells his first name as Gail.) That opens the possibility that the Buena Park theater I mentioned in my comment of January 21, 2010, was also designed by Santocono, and Overpeck merely signed the plans for both houses as Santocono was not yet a licensed architect (this comment by Carol Santocono, Gale Santocono’s granddaughter, on our Raven Performing Arts Center page, says that Santocono was first licensed to practice architecture in California in the early 1960s.)

I was going to update the dead link to the Boxoffice article I cited in my earlier comment, but discovered that the magazine is in the process of changing formats for its online archive again. That means that Cinema Treasures is going to be hit by another epidemic of linkrot. I’m not sure it will even be possible to link to pages in the new archive yet, as the new format appears to be set up only for “sharing” pages by embedding them in other sites.

If anybody wants to check out the new Boxoffice archive (they only have the four most recent issues available so far) it’s right here.