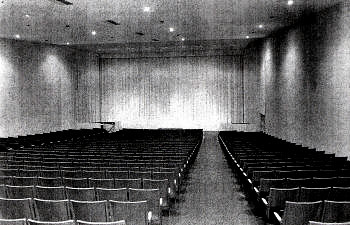 This single screen Fox Northridge Theatre was opened on September 11, 1963. It now operates as a Goodwill store.

This theatre is located at 10170 Reseda Boulevard.

I never visited this theater much less knew about it. However it must have been located across the street from a now closed theater I did frequent, the Peppertree, at 10155 Reseda Boulevard.

A Goodwill Store is now located in this building. Not much except for maybe the shape of this building indicates that is was ever a movie theater.

The Fox Northridge Theatre opened on September 11th. 1963, it seated 804 people. The opening attraction was “Come Blow Your Horn”.

This theater WAS located across the street from the Peppertree on Reseda Blvd. just south of Devonshire. I remember going there as a kid in the 70s. It later became a Standard Shoe store and then Goodwill. I’m not sure what it is now, but the building is still there.

I spent a lot of afternoons there, growing up in Northridge in the late ‘60s and early '70s. Our elementary school had a special deal for a summer series of not-so-great movies that ran each Monday afternoon. My mother was always thrilled to get us out of the house for a few hours, and she’d drop us off at the liquor store across the parking lot so we could buy candy there cheaper. The Fox had a center lobby, with two curving ramps on each side that took you up to the entrance curtains. They always played the same songs by 'The Association’ before the movie started, and the theatre was always WAY air conditioned, but that felt great in the hot Valley. The Peppertree 3 probably doomed the place, as it offered THREE screens (wow!) instead of just one. The building still stands, as mentioned earlier, first as a shoe store and now as a Goodwill thrift shop. The cinderblock building (with the south side painted white that would BLIND us in the afternoon sun after exiting the place!) withstood the 1994 Northridge earthquake, so unless it meets the wrecking ball, it should be there for a long time.

The September 2, 1963, issue of Boxoffice Magazine announced that a September 11 opening was planned for the Fox Northridge. The architect of the theater was Clarence Smale, with Carl G. Moeller, design partner. Boxoffice gave the seating capacity as 806.

Why does this say “Demolished”? The building’s still there. You can tell what it used to be from the shape of the roofline.

The comments above saying that the Fox Northridge has not been demolished are correct. The County Assessor gives a build date of 1963 for the structure currently at this address. That has to be the theater. As noted in my earlier comment, Clarence J. Smale was architect, with Carl G. Moeller as designer.

The Fox Northridge theater went downhill when my family opened up the Peppertree theaters right across the street and offered 3 screens cheaper tickets to get in and always gave away free popcorn every night. I worked there when it first opened until it was sold due to a family illness that forced us to move out of state. The fox Northridge was really a badly managed movie theatre.