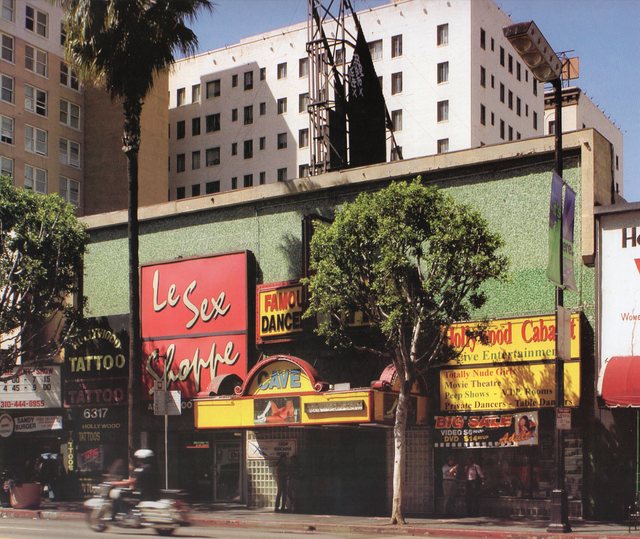 It became the Hollywood Cabaret, offering live ‘adult’ performances. By 2013 it was the Deja Vu Showgirls strip club.

The old Cave Theater as seen in that picture from 1981 was a great place. The interior was all done up like an actual cave. the curved cave ceiling and walls. The uneven cave floors. Some of the seating areas were partitioned off into almost booth like areas with low cave walls.

The atmosphere was very sleazy inside and as far as the management was concerned there was a policy of pretty much anything goes. It was not uncommon to see some pretty wild stuff going on in the audience as well as on the screen.

More intriguing about this disgusting theatre was that it was a popular restaurant/nightclub in the 50’s. You can tell by the green tile like walls that clash with the more modern marquee and surroundings.

Three videos from the 1960s, courtesy of the Facebook group Vintage Los Angeles, showing The Cave when it was the Haunted House discotheque:

You can see the reason for the Cave’s rock-like walls, as it housed the wax museum of monsters that you had to pass through in order to get to the main room.

The opening of the movie “Girl In Golden Boots” from 1968, filmed in the Haunted House discotheque. http://www.youtube.com/watch?v=9isRntFGz14

You can see the neon cobwebs on the marquee around the 0:16 mark here: http://www.youtube.com/watch?v=dBmaX64TWSw

That and Part 2 were obviously taken late at night, so most of the marquees along Hollywood Blvd. are dark, but it’s still fun to see how many you can spot.

The Cave, as well as the Hollywood Tatto Studio next door at 6317, is featured prominently in the 1994 film Jailbait. Bring back the “Glory Days” of Hollywood & Vine!

In the 1980 movie “DON’T ANSWER THE PHONE!”, there is a nice shot of the Cave theatre between the 39 and 40 minute mark. Many other street scenes are scattered throughout the 95 minute exploitation film.

Originally opened as Sardi’s restaurant in 1933. After a fire, it reopened as a nightclub. Then, it became the Cave adult book store/theatre. After that, it became the Hollywood Cabaret strip club. Now, it’s the Deja Vu Showgirls strip club. It should probably be listed as “closed”, as the building’s current incarnation doesn’t show movies or even have a screen in place.

I went to the Haunted House Club a few times in the late 1960’s.

On September 3rd, 2011 during a trip that included Los Angeles, I stood waiting at a bus stop in front of a former business with an aging mustard yellow marquee. A folding gate blocked the doorway, where discarded soda cans and fast food wrappers had accumulated in the space between. Some other signage made statements such as “Girls, Girls, Girls” (reminding me of the Motley Crue song)… I thought, “Oh, it’s a defunct movie theater that is now a defunct strip club!”.

For a while as I waited for the bus, two women in their early 20’s stood silently under the marquee holding a handmade cardboard sign that said “Hungry Hobos” and a request for money. Occasionally some people would offer assistance and chat with them, but I got the impression this was possibly a sort of performance/experiment to see how people would respond.

A year or so later I thought it would be fun to try to find the place on Cinema Treasures, but couldn’t remember what it was called or where in L.A. I had been.

Then on February 12th, 2016, I was watching the documentary “David Bowie – Five Years” that was airing on PBS. During a segment describing Bowie’s time in Los Angeles in the 1970’s, an interviewee’s voice says Bowie felt he needed to leave L.A. because the culture was getting too crazy and therefore unhealthy for him, while for a moment the image on the screen is a lit up marquee of a theater called The Cave taken from a passing car. …. I wrote down the name and looked it up on Cinema Treasures: Ha – it just happened to be the theater that I had stood in front of back in 2011! (Apparently with a remodeled exterior and reopened as a strip club.)

The Cave theatre opened on February 5th, 1971 with “The Ways of the Harlot”, an adult movie. Grand opening ad posted.

The Cave is featured in the 1984 movie “Angel”. In addition to showing the exterior, two scenes take place inside; when the killer attempts to hide among seated patrons/is confronted by the manager and in a follow-up scene when he is discovered by police/flees. The giveaway that they actually shot the scenes inside the Cave is a faux stalactite visible to the left of the screen, framing an exit door, when they briefly flash to the movie being played (the 1983 adult film “Sweet Alice”). At the time of filming, the auditorium looked to be small (under 100 seats) and had a red/black color scheme. The exterior entrance was wood paneled, with slats arranged in a diagonal pattern, and the carpeting was brown.