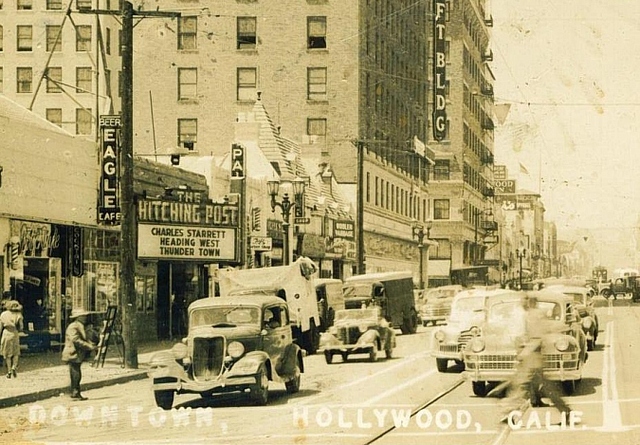 The Tele-View Theatre was located directly across the street from the Pantages Theatre on Hollywood Boulevard. Opened on November 9, 1938 as an automated newsreel theatre. It became the Hitching Post Theatre from January 24, 1941 with Gene Autry in “Melody Ranch” & Roy Rogers in “Robin Hood of the Pecos”. The programing was now devoted to westerns.

On November 3, 1949 it was renamed Paris Theatre, becoming an art house and reopening with the West Coast premiere of Stanley Holloway in “Passport to Pimlico”. It was closed on July 31, 1953 with the short 3D movie “Love for Sale” starring Bella Starr.

An empty lot replaced it which was utilised as an open plaza in front of the new Hollywood/Vine metro station. In early-2007, construction work began on the site, with a new building that incorporates the metro station entrance.

Here’s a question for the very knowledgable members here. On Vine, between Hollywood and Yucca, is a club now named the Avalon Hollywood. It was used in the 1984 movie “Against All Odds” as either the real or fictional club called The Palace. From the exterior, it’s obvious that this building was once one of the grand old movie palaces; can anybody here identify it?

You are talking about the Palace theater. Back in the 60s the Beatles played there and ABC tv used the theater for their hit variety show “The Hollywood Palace”. Now the Avalon nightclub.

Rafaelstorm, the Palace was always a live venue and TV studio, never a movie theater.

Many thanks for your prompt responses! From the exterior, it looked like a movie palace from the 20s, but it just goes to show that we shouldn’t assume.

Dick Jones, who starred on “The Range Rider” and later “Buffalo Bill Jr.” was a kid actor who appeared in a ton of westerns with all the big stars. He told me that on Saturday, his mother would drop him off at the Hitching Post where he would spend the day watching cowboy movies. Sometimes he would spot himself in the movie. Was also the voice of Pinocchio in the Disney classic.

I understand from the film documentary The Haunted World of Edward D Wood Jr (US 1995) that the 1953 film Glen or Glenda ( now a cult film) was premiered here.

The Hitching Post theatre reopened as the Paris with “Passport to Pimlico” on November 3rd, 1949. Another grand opening ad posted.

The Tele-View Tele-News Theatre launched as a 350-seat theatre which emulated the New York City Translux newsreel theaters. The concept included no ushers or ticket takers replaced with a turnstile. It launched November 9, 1938. After switching to all-westerns as the Hitching Post in 1941 to 1949, it completed its run as the Paris Theatre beginning in 1949. The Paris closed likely at the midpoint of a 30-year lease on July 31, 1953 with the 3-D film, “Love for Sale.”