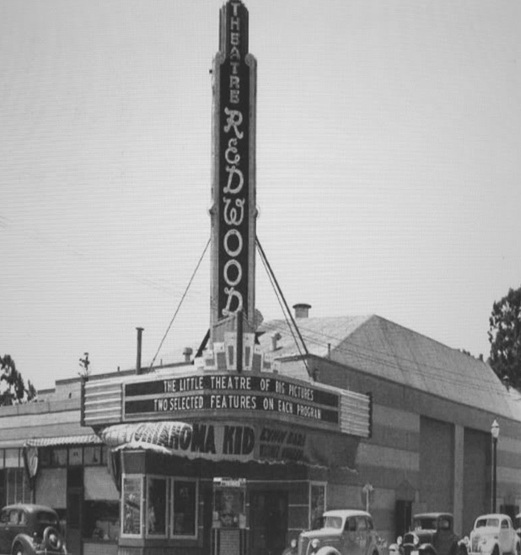 This theatre was opened in 1933 by Phil A. Frease. It was taken over by Fox West Coast Theatres in 1936. It was closed around 1955, and a after being demolished in 1956, it was replaced by a branch of Bank of America. An AutoZone is now on the site.

Joe Vogel’s post of May 7, 2008 puts my mind at ease about the concrete structure on Broadway which looks from the side like it had to have been a theatre originally. It being the original Sequoia from 1917 until 1929 makes sense. This would explain why Larry Goldsmith would remember the present Fox (former “new” Sequoia) as being the only theatre on Broadway until the advent of the recent Century ‘plex. As for the Redwood, it looks like nothing remains. Nevertheless, as I work in Redwood City, I will have to go to the intersection of California and Winkle Bleck and see the site for myself.

Let me start out by saying that my interest in this site is in seeing all this confusion cleared up . I stumbled onto this site by looking for “things ” Redwood City my birthplace (1942). I am retired up in Georgetown and I do miss Redwood City in a lot of ways and even more so the Port where my older brothers took me often starting about 1948.

In reading through all of these posts it is clear to me that the 3 theater’s facts locations are being mixed up. I will tell you what I know as FACT and why I can say that it is a fact and so on.

I will start with the Redwood Theater. FACT: It was located at the Southwest corner of California and Winkeblecker Sts.FACT: It was torn down along with every thing else on the block (auto dealer) in about 1956. FACT: A branch of the Bank of America was built on the site (1956). The Bank moved from its old site a block away at the Southwest corner of California and Broadway. I saw my first movie at the Redwood about 1950 (High Noon)?? We went to the Redwood Theater often because they allowed us to bring our own popcorn and the Fox Theater would not. I has an aerial photo showing the Redwood Theater and the car dealer(Kaiser) behind it out on El Camino. Conjecture: The building Anderson’s Tv is in at the site matched “Historic Aerials” photos from 1956.

FACT: The orginal location of the Sequoia Theater was on Broadway near the corner of Jefferson on the oppisite site of Broadway from the Fox/Sequoia. ERROR: The address of the orginal Sequoia as shown in the “Bits of History” Redwood City photos is wrong,The address would place this theater across Broadway (in the same block) from the Fox. The Courthouse takes this whole block. FACT: The Bank of America did save the orginal Sequoia building and they did tear down the branch office they were in at the corner of Jefferson and Broadway when they were done and it appears they (still) use it for a parking lot. See “Bits of History (RWC) photo#208

The Sequoia Theater (Fox) had some of the plaster ceiling fall onto people in 1950.(See “Bits of History photo#660. injuring 30 people. They reopened a couple of months later as the Fox. I think they replaced a lot of "bad” plastering. My conjecture. The official term was “extensive” remodeling. Rmors were flying around that someone lit off a “cherry bomb” on the roof. Other rumors blamed a passing train.

If anyone wants a copy of the Redwood Theater aerial photo or screen captures of the buildings locations E-mail me at I hope this clears things up.

The Fox is at 2215 Broadway (though they give their box office address as 2223), so 2114 is a block down and across the street, near the corner of Jefferson. The old courthouse is at 2200 Broadway, according to the current occupant’s web site.

Here’s Google Street View of the building that once house the first Sequoia Theatre. You’ll have to be patient while that page loads.

Current Bank of America is on corner of Jefferson Ave. and Marshall St., with the parking lot on corner of Broadway and Jefferson..

I notice that the old Montgomery St. that changed in the mid 50’s was renamed WINKLEBLECK ST.

Larry the photo I have of the Redwood Theater was taken in about 1950 from about 500 feet above and is a bird’s eye where as one can read the wording on the car dealership.

Many thanks for the above photo you mention. I received it thru your personal Email. If you scroll up this site,look for comments from Joe Vogel. He has posted several great pictures of this little theatre. Also check out Fox Theatre, Redwood City on this site, you’ll find more great comments and pictures of that once beautiful theatre!!

it seems there was another theater in Redwood City -the “Bell Theater” on Main St. I just opened a new thread-but I don’t have much info. Just what info a 70 year old man mentioned when giving some oral history to the Redwood City Library in 1976

The Redwood Theater was built in 1933 at a cost of $70,000 for former San Francisco theater exhibitor Phil A. Frease. The architect was WIlliam I. Garren. Frease co-owned the cinema with O.H. Watson. In 1936, Frease died of a heart attack, and Fox West Coast, owner of the Sequoia Theater, took an option on the Redwood.