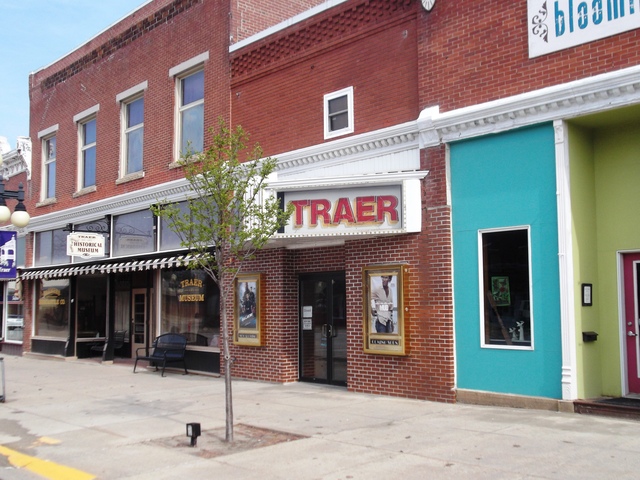 The Princess Theatre was opened prior to 1914. By 1926 it was listed with 200 seats. By 1932 it had been renamed Traer Theatre. It was closed in 1950 and became a beauty parlour following the opening of a new movie theatre in town. The new theatre was closed in 1958 to become a Masonic temple and the old Princess/Traer Theatre reopened in March 1958.

Here is a story dated 2/2/58 from the Cedar Rapids Gazette:

The recent history of the Traer motion picture business is a little confusing. First there was the “oldâ€ theater, then the "new” one. When the new theater began operation in 1950, the old one became a beauty parlor. Later the “new” theater was sold to the Traer Masonic bodies and remodeled for their use. At the time of the sale, the motion picture equipment was moved back to the old theater, which had been vacated by the beauty shop. For months the projection equipment theater seats and other apparatus has been stored, unassembled in the older theater location.

And it is in that building that Eddie Malina will put the pieces back together so that Traer people can see movies again in their own town theater.

Between today and opening day for the renovated Traer theaterâ€"probably March 1â€"Malina has his work cut out for him. Among other things, he must remodel the old theater back to a theater again. This means lowering the floor Into a general slope like it was before the building became a beauty parlor and the floor was leveled.

Malina is planning on a remodeled canopy for the front of the theater building, some rewiring and other necessary jobs. Included in the time set aside fnr the renovation must be countless hours of work reassembling, relocating and reconditioning the projection equipment, placing the seats and other such jobs.

None of the equipment which will go into the new Traer theater is what you’d call old in show business. All of it, from the projectors to the theater seats, was new when the new theater opened in what is now the Masonic building. “Itâ€™s all been checked over carefully and it’s all in good condition,” Malina said.

The theater which Malina will open will seat around 200. Admission charge will be 20 cents for children, 33 cents for teen-agers in high school and fifty cents for adults. Malina himself will run the projection booth.