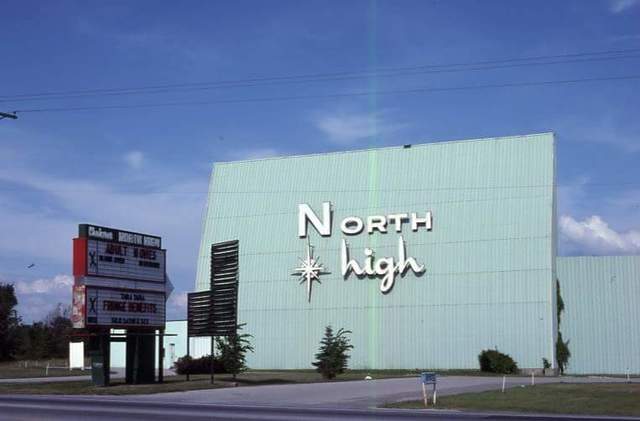 North High Drive-In was opened on June 4, 1952 with Jeanne Crain in “Belles on Their Toes” & Roy Rogers in “North of the Great Divide”. It held 1,875 cars and a second screen was added in the 1970’s. Sold for $1.15 million to Schottenstein for a shopping center.

The Kingman was a different drive-in, further north.

Yeah, North High was definitely different than Kingman. North High Drive-In, the one time I was there, was the quietest drive in I HAD ever been too. (Go figure), It was pseudo eerie.

Drove by there recently, and that land is still not developed.

This was the first suburban Columbus theatre to show 3D, opening HOUSE OF WAX on 8/1/1953.

Opening date was 6/4/1952. First features were “Belles On Their Toes” and “North of the Great Divide”

Owned by Hofheimer and Sugarman in 1956,Danny.

jwmovies, thank you for finding the current address for this Drive-In. Many addresses in that area of Central Ohio have changed with the rapid development making it very difficult to get accurate information. Making things even more confusing is that this part of US Rt. 23 is also known as Columbus Pike.

When the Drive-In opened in 1952, the address was listed in the Columbus Dispatch as “High Street North of Worthington”. Miles purchased the theatre in 1954 and listed the address as “8750 North High”. Newspaper advertising for the theatre lists the 8750 address until the theatre closed in 1981.

The Miles North High Drive-in was waaay out in the country back in 50’s and 60’s, where US23 still had the grass median, and there was NOTHING nearby but corn and farms. Get there before dark, and play on the playground at the base of the screen. Back the family wagon in the slot, drop the tailgate and enjoy a cartoon, then TWO whole full length films. Remember “Let’s go out to the lobby” jingle? Even in the summer, it chilled enough later in evening you had to grab a blanket. They added a 2nd screen in 70’s. [towards the end-in late 70’s-I used to circle the theater at night in club Cessna 172, and catch a peek at the porn for free!]