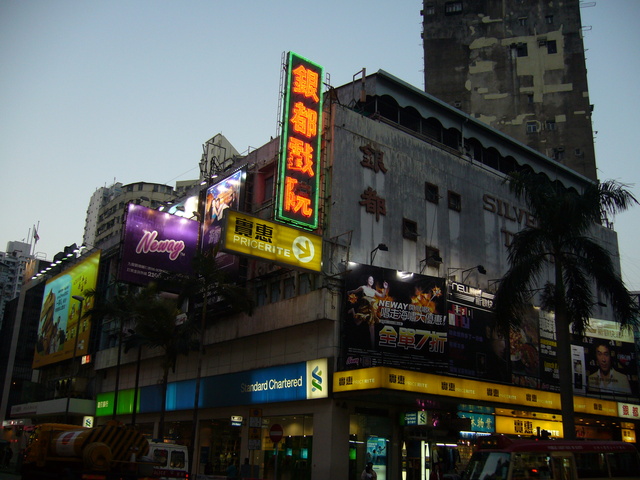 The Silver Theatre was the first theatre to be built in Kwun Tong. Kwun Tong, a residential and industrial district in East Kowloon near the Kai Tak International Airport, was developed by the Hong Kong Government in the 1960’s.

The theatre was designed by architect Robert Fan [1893-1979], and opened to business on 7th September, 1963 with a Mandarin film. The 1,440-seat auditorium with a 52 feet wide screen and equipped with Simplex X-C projection and sound system is on the first floor of the four-storey theatre building, with ticket booths and lobby on the ground floor.

A home-made bomb exploded in the theatre on 1st October, 1964–the national day of the People’s Republic of China–one seat was broken and two patrons were injured with one seriously.

The licence of the theatre was revoked by the Hong Kong Government late at night on 14th June, 1967 for unlawful activities in the theatre. It re-opened on 23rd May, 1968 with a Mandarin film.

As the theatre building is within the re-development zone of Kwun Tong, its days were numbered, and it was closed on 9th July 2009. It was demolished in 2013.

Raymond: corrected… feels like driving the #14 bus on Google Earth.

The theatre had been demolished.

Correction to the address: It was Yue Man Square at the junction of Fu Yan Street, not Yuen Man Square.

It was one of the three oldest buildings in the commercial centre of Kwun Tong, built shortly after reclamation was completed, and was demolished as part of the Urban Renewal Authority’s Kwun Tong Town Centre project.

You can see a lot more info on the original area here: