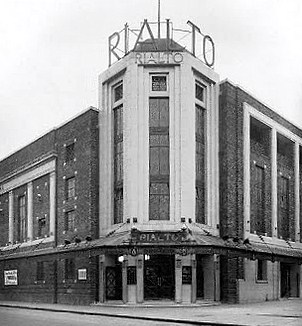 The Rialto Super Cinema opened on 21st December 1931. It was built for an independent operator and was designed by architects S. Butterworth & Duncan. The cinema had a fully equipped stage, a proscenium 35 feet wide and a Compton 3Manual/7Rank theatre organ with the console on a lift, which was opened by Harold Tetherington.

The auditorium was illuminated by Holophane lighting, with seating provided in stalls and circle levels. There was also a cafe for the convenience of patrons.

It was taken over by Odeon Theatres division of the Rank Organisation from 28th July 1957 and was re-named Odeon from 16th May 1959. It was at this time that the building underwent some renovation and the Compton organ was removed to become spare parts. The stage was being used for amateur dramatic productions at least twice a year. Sadly, the Odeon closed on 23rd March 1974 with Donald Sutherland in "Don’t Look Now". It was demolished later that year and an office block and car park operated by NCP was built on the site.