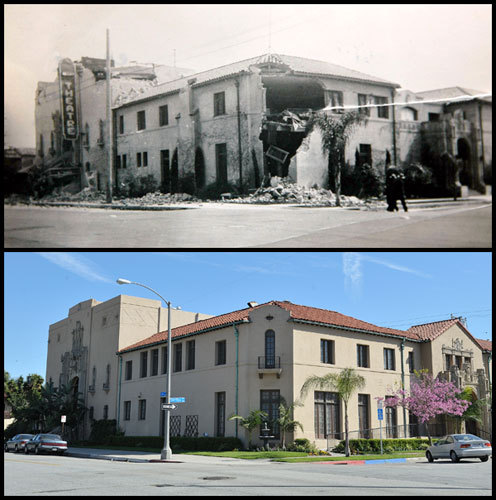 Construction at the Long Beach Ebell is moving along, the interior is gutted and can be see from the outside through several big holes cut into the side of the building. It looks like there going to maintain the buildings footprint and faÃ§ade.

Good news-the loft condo construction is just about complete and half of the units have been sold. The builder has done a great job of updating without losing its character.

Unfortunately, the projection booth loft has been sold, but the tri-level one with the proscenium arch is available, with rooftop view deck over the long beach skyline.

Driving down Alamitos Avenue today, near Third Street, I saw what was clearly a theater at one time. The facade has been repainted, but the building doesn’t appear to be in use. As the Ebell is a few blocks away, I ruled that out. If anyone has info about this theater, please let me know.

Litigation in December 1947, per the LA Times:

The action charges violation of anti-trust laws in restraint of trade in that the defendants allegedly conspired to relegate the plaintiff’s theater to the position of a “last-run” theater, making it impossible for him to compete on a fair basis.

Rector operates the Ebell Theater in Long Beach. Pending hearing of the suit, Rector asks for an injunction restraining the defendants from the asserted discrimination.

I solved the Alamitos Avenue question. The building was an auditorium and a skating rink, but never a theater. It just looks like one.

The Ebell Lofts site is defunct. There is a discussion of the renovation on this page:
http://tinyurl.com/3rba49

They have a new site, but not sure for how long. Nice history and pictures.
http://www.ebell-lofts.net/

The Ebell Theatre of Long Beach, CA was built in 1924 It was converted to 11 unique residential lofts in 2005 in sizes ranging from 1200 to 2200 square feet. The original exterior was preserved in the process, and it is recognized by the city as a Historical Landmark for it’s unique architecture and community history.

History:
ADRIAN JOHN EBELL, son of Henry T. and Mary (Palm) Ebell, was born Sept. 20, 1840, of English and Dutch ancestry in Jaffnapatam, on the Island of Ceylon (now Sri Lanka). When about ten years of age, he was sent to this country with an older sister to be educated. After preparatory school he entered Yale in 1858. He then taught music in New Haven and in Chicago, and then moved to St. Paul and took some noted photographs. He served for a short time in the Indian war in Minnesota, with the rank of 1st Lieutenant. He wrote an article June 1863 in Harpers Bizarre titled “The Indian Massacres and War of 1862” . http://harpers.org/archive/1863/06/0039583 He then returned to Yale and graduated at the Scientific School in 1866 with a PhD.

He afterwards studied medicine at the Albany Medical College, graduating M.D. in 1869. In the meantime he had begun to lecture before schools and lyceums on natural science. In 1871 he established himself in New York City as director of â€œThe International Academy of Natural Science,â€ which comprised a plan of travel and study in Europe for annually organized classes of young ladies. He was married, in September, 1874, to Oriana L., daughter of Dr. A.J. Steele, of New York. He embarked from New York, on one of these study tours, late in March, 1877 and died en route at age 37.

He made a visit to California in 1876, and while here he organized a class in Oakland. After his death the name “Ebell” was taken by the Oakland chapter or “Club” Other chapters founded later used the same Ebell name.

The Ebell Club of Long Beach, an all women’s organization, was established in 1896 with the purpose of bringing culture to the Long Beach area. It is Long Beach’s oldest civic and philanthropic organization. Their original mission was described as a united effort toward the highest development of humanity, philanthropic activities, wider horizons for women everywhere and opportunities for their higher education with emphasis on the arts and sciences. At the turn of the century, most women in Long Beach of affluence and education belonged to this organization. They met in a club house at the corner of Daisy and Ocean Avenues until 1919.

The Ebell Club and Theatre was built in 1924 by Clark Philip/ CT McGrew. No expense was spared during its construction. It is an example of Churrigueresque architecture. Its lavish, sculpted facade style date back to Spanish architect Jose Churriguera (1650-1723) who developed the style that is characterized by play of light and shade through lush cement ornamentation. It was heavily damaged in the 1933 Long Beach earthquake, but was quickly repaired. In 2003 the Club was restored to its former elegance and now serves as a popular location for wedding receptions.

The Ebell Theatre was constructed as a 1000 plus seat theatre with both stage and screen. It was used commercially as a movie theater from the 1930’s to the 1950’s. It changed hands several times and was also knows as “Holt’s Ebell” and the “Metro Ebell”. Construction to repurpose the building to eleven new residential loft units was started in 2003 and completed in 2005 by JR Van Dijs . Each unit has a unique floor plan and sizes range from 1200 to over 2200 square feet. Each unit has exterior space including balconies and roof decks for the upper floor units. 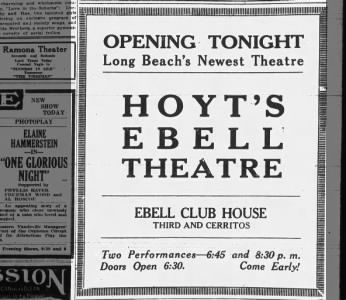