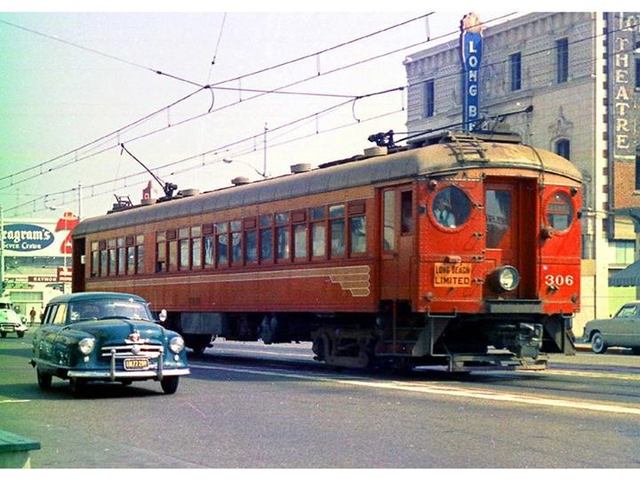 Located on American Avenue which later became Long Beach Boulevard. Lenney’s Elite Theatre was opened on January 22, 1921 with Noah Beery in “Dinty”. It was designed by architectural firm Walker & Eisen. It was renamed Empire Theatre on June 6, 1921 and began operating as a playhouse. On October 9, 1922 it was renamed Mission Theatre playing movies and occasional stage productions. Alterations were made in 1924 to the plans of architect H.L. Gogerty.

The building was razed for a parking lot in November 1952.

This is a sketch for a Long Beach Theater that may never have been built, according to the caption:
http://tinyurl.com/yyl9fp7

Could this be it on the left? I’ve looked through all the Long Beach listings, and this is the only one that looks to be the right distance away from the back of the Fox West Coast

Whoops, helps if I include the link:

No, that is the United Artists Long Beach Theatre. See my comment on the Fox West Coast page.

According to Mr. David L. Junchen’s “Encyclopedia of the American Theatre Organ”, pg. 628, the Mission Theatre in Long Beach had a Smith theatre pipe organ installed at one time. Mr. Junchen’s Smith opus list gives no details as to exact nature of this organ, how many manuals, ranks, what the blower serial # was, or what year it was installed. Anybody know where it is now?

This page is still missing the architects (Walker & Eisen, 1922, and alterations by H. L. Gogerty, 1924) as well as the aka’s: Empire Theatre (opening name) Mission Theatre, (by 1924) and Major Theatre (around 1929, according to Bill Counter’s page about it.) Counter also notes that in later years the house was advertised as the Fox Long Beach Theatre.

I don’t know why completion of the Empire Theatre was delayed until 1922. The July 14, 1920, issue of Building & Engineering News carried this notice that the contracts for construction of the project had been let:

This opened as the Empire Theatre and became Mission on October 9th, 1922. 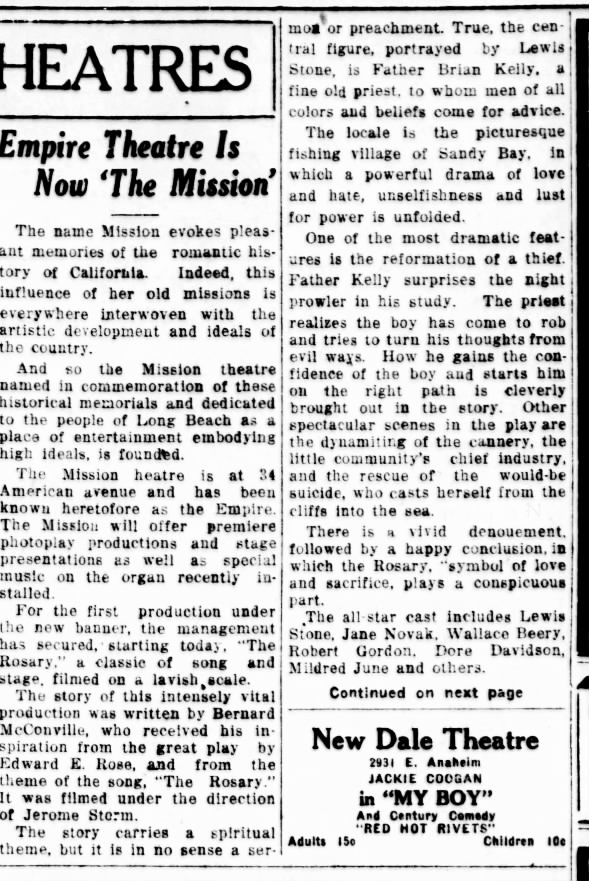 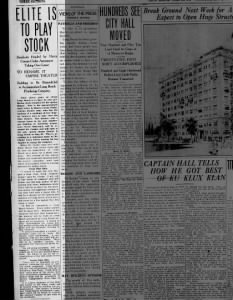 We are missing three akas for this house, and its original opening date. It was opened as Lenney’s Elite Theatre on January 22, 1921. The first operator, J. M. Lenney, had owned two theaters in Harrisburg, Pennsylvania, and sold one to finance his California venture. He bested Sid Grauman in a competition for the lease on the new house and also secured the Long Beach franchise from Associated First National Pictures, Inc., opening with their feature film “Dinty” and an assortment of short subjects.

Despite his experience a an exhibitor, Mr. Lenney did not succeed with the Elite Theatre, and it closed in early May. The owners of the theater then entered an arrangement with the Harry Corson Clarke Players, a stock company. The opening of the renamed Empire Theatre was scheduled for May 30, but delays in preparing the house for stage productions pushed the actual opening date back to June 6.

Sadly, the Clarke Players had no more luck with the house than Mr. Lenney, and the Empire closed on June 9. Another stock company then took over, opening (after another, more extensive remodeling of the stage facilities) on September 11. The third time, however, was not a charm, and the Empire went dark again on October 3. Another stock company attempted to revive the Empire, opening on December 11, but lasted less than a year, as by early October, 1922 the theater had been renamed the Mission and was again presenting photoplays.