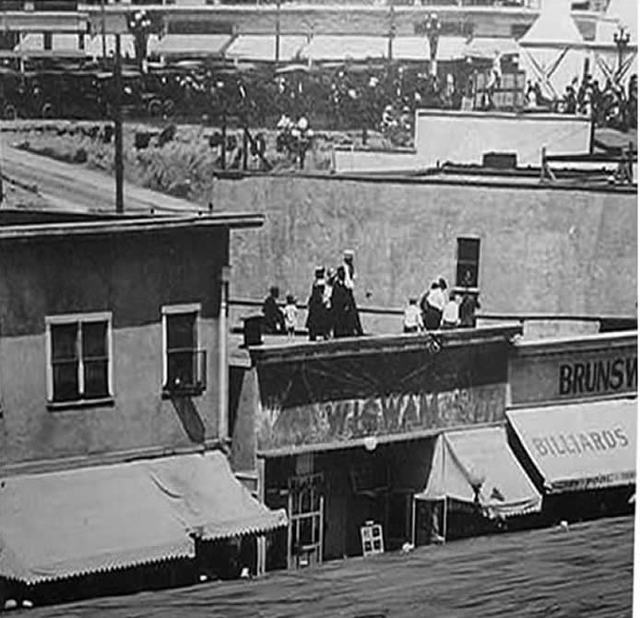 This theatre was located at 207 East Seaside Boulevard.

This is from an ad in the Long Beach Independent. Open Daily 11 a.m.

Det. Insp. E. H. Kennedy said he paid 50 cents to see films in the theater and that one of them, entitled “Tantalizing Teaseâ€, exhibited a comely young lady whose attire consisted mostly of a smile. The theater is at 207 E. Seaside Blvd. Kennedy was assisted by Officers F. L. Good and R.C. Deaton. Wind and Solosky were released on $300 bail each, pending court appearances.

You can see a theater under construction in this photo, but I can’t read the sign to what the name is:
http://tinyurl.com/3bfts4

The Victor was renamed the Rainbow in April 1950, according to an item in Boxoffice magazine at that time:

Joe Rankine Jr. has opened his remodeled Rainbow Theater, formerly the Victor, on the Pike at Long Beach.

Sale of two theaters by Isaac Victor, veteran Long Beach showman, was revealed last night. E. V. Tracy, owner of the Tracy Theater, has negotiated purchase of the Victor Theater, with clearance of the property through escrow expected today. The Rialto Theater was sold to Louis Federici.

The Victor Theater opened as the Wigwam Theater sometime in 1914. Around 1923-1924, was remodeled and reopens in 1925 as the Scotts Theater. From 1932 to 1935, was called The Pike Theater. By 1938, was acquired by Isaac Victor, who changed the theater name to Victor Theater. Still, had another name change in 1950, this time to Rainbow Theater. In the 1953 city directory, the building was listed as vacant.

M.C. Konkele spent just $1,800 building this modest, one-story venue in March of 1913 at 207-209 East Seaside on the Pike. When the 400-seat Wigwam Theatre opened in 1913, W.H. Electrical & Engineering provided the largest electrical, flashing sign in the history of Long Beach at 12' by 12'. To get additional revenue, the building had a peanut and popcorn stand that not only served patrons but had a window facing out to the street.

Pioneering theatre owner Jay Cleve Scott took on the venue under the banner of Scott’s Wigwam Theatre. Scott also ran the American, Rex, Palace and Rialto theaters at various points. At the end of a 10-year leasing agreement, Scott had outgrown the venue. He had the venue gutted and created a much more impressive two-story venue rebuilt by J.D. Sherer & Son. The venue was known as Scott’s Theatre on the Pike opening on September 11, 1924 with Wallace Beery in “Richard, the Lion-Hearted” with Rea Douglas at the pipe organ. It was now on a 25-year lease.

The theater changed names becoming an exploitation house trying to get passer-bys to drop a quarter or so to watch films. An example was in 1938 as the, again, renamed Victor Theatre run by Isaac Victor played “Birth of a Baby.” Victor was the grandson of Harry A. Victor who had started his theater business back in the nickelodeon, store-show days in McKeesport, PA in 1908. He had taken on the former Scott’s Theatre in 1929 equipping it for sound. The theatre was in the heart of a Depression-era building boom that brought a new pier and, across the street, the Municipal Auditorium. Sylvan Victor took over the operation running it into the 1940s. The theatre was sold to E. V. Tracy of the Tracy Theatre who steered the venue to the end of its lease in 1949.

On May 21, 1950, Harold Simpson remodeled the Victor as the Rainbow Theatre as an ultra-discount, sub-run house offering seats for as little as 14 cents each at opening. It relaunched that day with Esther Williams in “Neptune’s Daughter” and Rod Cameron in “Panhandle.” The venue was named for the rainbow-shaped pier with colorful lighting effects that had been built in 1931 in close proximity to the theatre called the Rainbow Pier. There was no pot of gold at the end of the Rainbow which came quickly.

The theatre returned to its exploitation days rebranding as the Follies Theatre beginning on March 2, 1951 under new operators. In late August 1951, Chester Wand and his projectionist were hauled off to jail for showing immoral films. The theatre rebranded thereafter and until closure as the El Rey Theatre also showing exploitation films through 1953. It then became home to a church from 1954 to 1957 before being offered for sale. The El Rey Theatre was later demolished as was the Rainbow Pier which closed on March 20, 1966, and the Municipal Auditorium in 1975.