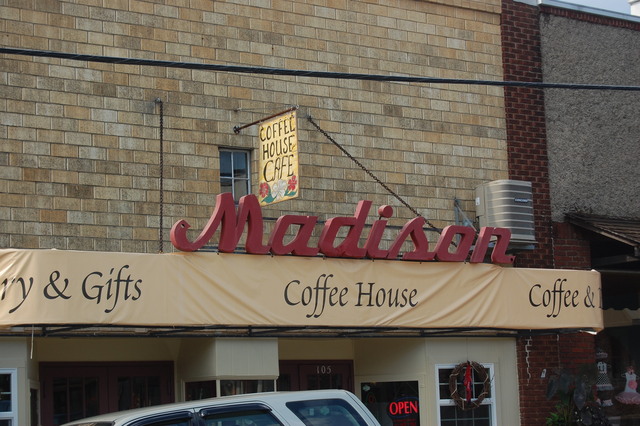 The Dixie Theatre was opened in October 1925. On January 11, 1940 it was badly damaged by a fire. It reopened April 12, 1940 as the Madison Theatre. The Madison Theatre was a small and clean light brown brick fronted building sandwiched in between two other buildings. A white marquee sheltered a recessed ticket booth and entrance."Madison" was spelled out in red script along the top of the marquee.

A 1987 view of the Madison Theater in Huntsville.

This one is still standing, but it’s been repurposed. The marquee is still hanging, but a sign tied to it under the “Madison” lettering says “Coffeehouse and Flea Market”. Use should be changed accordingly.

I’ve found the Madison mentioned by name in Boxoffice as far back as April 6, 1940, when manager Carl Presley announced that air conditioning would be installed. The building was probably still under construction at that time, and it was a replacement for Presley’s Dixie Theatre, which had burned early in 1940, according to Boxoffice’s issue of February 10.

The Dixie Theatre dated from at least as early as 1927, when it was sold to a Jim Warren. This was mentioned in a Boxoffice “Twenty Years Ago” feature in the October 25, 1947, issue.

The March 30 issue of Boxoffice said that Carl Presley was building a new, 350-seat theater at Huntsville. The house was actually owned by his father, M.B. Presley, of Savannah, Missouri, who, according to his obituary in the June 4, 1955, Boxoffice, owned three other theaters as well. Incidentally, the City of Huntsville’s web site lists Carl Presley as having been the town’s mayor in 1936-37.

Various issues of Boxoffice from 1954 to 1963 named Harley Gilliam as manager of the Madison. Then, various issues from 1966 to 1970 mention Joe Presley as operator of a theater at Huntsville, though the name of the theater is never mentioned.

The Madison is listed in a 1968 ad for Norelco as one of 341 theaters that had installed that company’s 35/70mm projection equipment.

The January 26, 1976, issue of Boxoffice said that the Madison Theatre had been remodeled and reopened by Kevin Hatfield and John Ogden. Opening day had been January 16.

A.P. Parker opened the Dixie Theatre for films on Thanksgiving Day 1925 after a soft launch in October with live events. On January 11, 1940, the theatre was decimated in a fire. After being closed for three months, on April 12, 1940, the reconstructed facility relaunched as the Madison Theatre. Ad are discontinued December 31, 1985 as the Madison’s regular feature days appear to end.