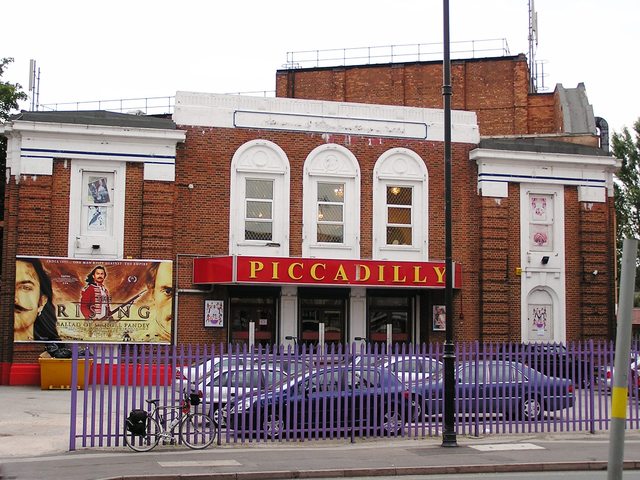 Built on the site of the Picturedrome (1913-1929), the Piccadilly Super Cinema opened on 22nd May 1930 with Norma Shearer in "The Last of Mrs. Cheyney". It was designed by noted cinema architect Harold Seymour Scott. Built for and operated by the independent Hockley Picture House Company Ltd. The Piccadilly Super Cinema was equipped with a Compton 3Manual/10Rank theatre organ which was opened by Harold Stringer.

It was taken over by Associated British Cinemas(ABC) on 22nd October 1936. During World War II, the rear of the cinema was damaged in a German bombing raid which destroyed the nearby Waldolf Cinema. The architectural firm Satchwell & Roberts were brought in to supervise repairs to the Piccadilly Super Cinema.

It was re-named ABC Sparkbrook in 1961. Parts of the Compton organ were removed from the building and shipped over to Australia to be installed in Melbourne in the suburban Malvern Town Hall, where it is still played today. The ABC closed on 2nd March 1974 with David Essex in "That’ll be the Day" and Roger Moore in "The Man Who Haunted Himself". It was converted into a bingo club, last operated as a Zetters Bingo Club.

It re-opened as an Asian cinema which was named Dreamland Cinema, then lay empty for several years until it became a bingo club again in 1981.

The Piccadilly Cinema was divided into three screens and re-opened on 6th January 1995, screening Asian ‘Bollywood’ films which continued into the 2000’s. The building has been renovated and is now a banquet hall using the orchestra stalls area, where only the lower section of the proscenium and side-walls are visible. The two screens in the former circle are unused.

This was my first job when I left school in 1964. I started as a Trainee Projectionist. When I left in 1969 I was 2nd Projectionist. The picture brings back memories to me especially when I saw the large light fittings which we had to wind down periodically to clean. The Projectors were Ross ABC projectors with peerless arcs and an RCA sound amplifier. Fond memories

@ Michael1948 I used to do relief for Doug Reeves.. From memory they used to have a female Projectionist there. and for a short time The District Offices wher there… Peter Albutt. Jim Hunt was engineer

Yes there was a femail projectionist her name was Pat, she was transferred from the Adephi Hay Mills. Doug Reeves was he the manager?. Was Mr Mathews the assistant manager?. As I recall the district offices were in stirchley. Jack Burdett was the chief Projectionist during my time at the picadilly. regards

Doug was the manager. I had been told he was going to the Capitol when Sparkbrook closed. Johnny Brockington phined me up and in the conversation told be that Doug Did not make the move.. within 10 days I had been appointed Manager of the Capitol Doug went to the Warwick Acocks Green.

I have fond memories of my childhood days of going to the Piccadilly on Saturday mornings and being a member of the ABC Minors. I can still hear the singing of the Minors song and the mighty Compton Organ playing music from that time. You may be pleased to know that the organ was shipped here to Australia and is regularly played at organ recitals at the Melbourne Malvern Town Hall where is was beautifully restored. Check it out. http://theatreorgans.com/southerncross/victoria/Malvern.htm

Hi did anyone work there in 1976,if so was their an Asian guy going by the name of cal or Carl his name may of been Khalid,any replays would be appreciated,also was their a cinema known as playhouse or picture house in birmingham

ozbeach, Contrary to what is said here about the organ going to Australia ,The Theatre organ societys page states the Console and five ranks of pipes came from the Astoria Old Kent Road,London.The site you mention does say the Relays and some pipes came from Sparkbrook,ultimately the relays weren`t used.