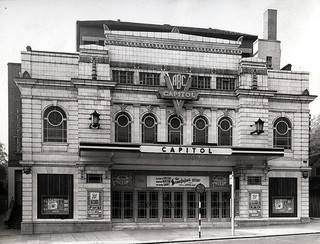 Located in the southeast London district of Forest Hill. Designed in a Neo-Classical style, the Capitol Cinema was built in 1928-9 for London & Southern Cinemas and designed by noted cinema architect and garden designer John Stanley Beard.

It opened on 11th February 1929 with John Gilbert in “Man, Woman and Sin”. As the cinema was designed for silent movies, sound equipment had to be installed soon after opening. It originally had a Compton 2Manual/8Ranks theatre organ which was opened by organist Edgar Peto. There was also a café for the convenience of patrons. The stage was 22 feet deep and with three dressing rooms it allowed for variety shows to be staged.

It was taken over by Associated British Cinemas(ABC) from July 1933 and they operated it for the remainder of its cinematic life.

Occasional variety shows were part of the programming in the 1950’s and the Compton organ was played until it was removed in the late-1950’s.

It was re-named ABC in December 1968 and closed on 13th October 1973 with Gene Hackman in “Scarecrow” and Gary Grimes in “Class of ‘44”. The building stood empty for several years until it was leased to Mecca Ltd. and opened as a Mecca Bingo Club on 23rd February 1978. Last operated as a Jasmine Bingo Club, bingo ceased in December 1996 when the Jasmine chain were made bankrupt. The building again stood empty and unused.

It re-opened on 9th May 2001 as part of the J.D. Wetherspoon chain of pubs and is now called “The Capitol”. In September 2014, it was announced that J.D. Wetherspoon were planning to close the Capitol pub. It was closed in June 2014 and the building was put up ‘For Sale’. Wetherspoon’s re-opened the pub by October 2017.

The Capitol is a Grade II Listed building.

On way to visit Horniman Museum, I spotted this ex-cinema and was astonished to see so many original decor features survive though used as a pub. Couldn’t tell if balcony (circle) is used, but could see it from main floor.

I am researching the history of this place and would like any information available. If you feel you could help please reply to this message. T Bean.

Hi Bean.
JS Beard (the Architect) was my great grandfather. My grandfather (93 and still going strong) recently finished writing a family history so I might be able to help you out with some info.

This sounds excellent. Could you please give me a quick call on 07092 173263 with any kind of contact details?

I really want to know where the organ went in the 1950s. Can anybody help?

A few contemporary photos of the Capitol as a Wetherspoons pub here:–

As of October 2017 the Capitol is up and running again as a Wetherspoons pub with no apparent change to the interior from 2014.

Mecca disposed of several bingo clubs to Jasmine Bingo, this was one of them, and they were the final bingo operators here.