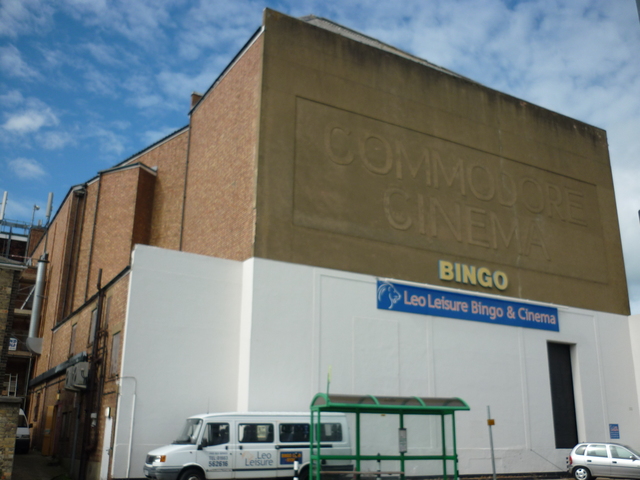 The Commodore Cinema opened in August 1936. Ryde is the largest town on the island, and the Commodore was the largest cinema built on the island, having a seating capacity of 1,507 in stalls and circle levels. It was operated as an independent cinema by Ryde Cinema Lrd, a subsidiary of Southern Cinemas Ltd. It was fitted with full stage facilities and there was a cafe and a ballroom inside the building.

In 1962 it was acquired by Isle of Wight Theatres Ltd, and then in October 1965 was taken over by the Star Cinemas circuit of Leeds. They sub-divided the building into a bingo club in the former stalls area and a twin-screen cinema in the former circle, each seating 184. The ballroom was converted into Screen 3, which has a seating capacity of 176. It was taken over by the Cannon Group and re-named Cannon. The 3-screen Cannon was closed in September 1987, but the bingo club remained open.

Ten years later, the cinema section was taken over by Peter Walker and re-opened on 11th December 1997 as the Picturedrome. It was then operated by the independent chain Reeltime Cinemas. It continues today operated by Leo Leisure, as does the Cascade Bingo Club in the former stalls area.

The operating company who owned the Commodore has gone into administration and the future of this cinema is now in question. At present it continues to trade as the administrators have been keeping it open and according to a local press report, a sale has been agreed but let’s hope it is somebody stepping in to keep the cinema open.

Leo Leisure Ltd a family owned business who run the Bingo club in the former stalls area of the cinema are to take on the running of the Commodore’s three screens.

I’ve a fond memory of visiting this cinema back in 1969/1970 while on a family holiday in Ryde. My Sister and I went along to the Saturday morning picture show, we sat through a CFF programme with a packed auditorium, presumably a mixture of local children alongside us holidaymakers.

There was no bingo then the entire cinema was a single screen operation. It is hard to imagine it as a three screen cinema with bingo in the original stalls.

If my memory serves me right KES was the movie playing during the main performances for that week, which would have been August. The cinema itself offered a moderate size auditorium, the facade I’m sure was brilliant white and the cinema name was featured in large letter signage above the entrance. Stills from the main feature were displayed outside as was common back then.

During a visit to Ryde a couple of years ago I walked past the Commodore cinema, it looked so much smaller to how I remember it. I think Peter Walker had recently acquired it and had tidied the facade. I would love to see a photograph of the venue interior and exterior as it would have been back then.

Reading here that the venue is under threat I do hope it can continue to operate as a cinema.

I saw a film here (Spy Kids[2001]?) some years ago. For some reason the staff were all dressed as cowboys. I cannot remember which screen we were in, the walls were a rather bright pinky red and the projector could be heard even during the not so quiet parts of the film.

It was good to be in an almost proper cinema!

When the Commodore originally closed on December the 3rd 1987, the final films to be shown were, Surrender, A nightmare on Elm street part 3 and Ishtar.

The website proudly states “All Tickets, Everyday all day £3.50” which is unbelieveably cheap for 2015.