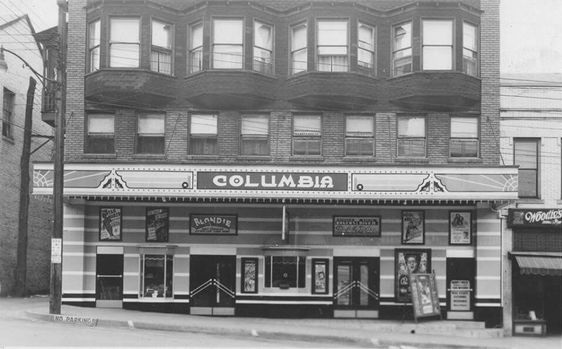 There was a Columbia Theatre operating in Kittanning at least as early as 1931, when it was mentioned in the April 21 issue of Exhibitors Forum.

The last mention of the Columbia I’ve found in Boxoffice is from the issue of October 12, 1964, which said that the house had reopened after a summer shutdown. It would operate Thursdays, Fridays, and Saturdays, running double features. The owner/operator was Joe Brody. This item said the Columbia had 500 seats.

I have been looking through issues of the Kittanning Simpson Leader-Times on www.newspaperachive.com and the last ad I have been able to find for the Columbia Theater is for the week of March 24, 1965, when the theater was showing a double bill of “Baby, the Rain Must Fall” and “Send Me No Flowers.”

Demolished in 2013. Originally opened as Wick Theatre in 1913. Full chronological history below.

There is conflicting information about John Wick’s 1913 theater project in various construction journals of the period. The February 1 issue of Engineering Record says that John Wick would receive bids for construction of an opera house designed by local architect O. C. Rearick. A February 22 article in The American Contractor also notes the project, but gives the architect’s name as O. C. Rairigh. By March 1, American Contractor is saying that Wick’s theater project is a movie house being designed by Pittsburgh architect Joseph L. Neal. The later AC items also say the theater is to be one story, and 47 feet wide, rather than the 2 stories and 52 feet wide reported in the earlier items. Did John Wick build two theaters in 1913, or simply switch architects and have the plans of his one theater modified? The Internet gives no answer.

Fortunately, the trade publications are clearer about the change of name from Wick Opera House to Columbia Theatre. This item is from The Moving Picture World of August 6, 1921:

“Mr. Brown, of the new Columbia Theatre, Kittanning, Pa., has about put the finishing touches to this beautiful playhouse. This theatre was formerly Wick’s Opera House for quite a number of years, but has been completely remodeled and it certainly presents an up-to-date appearance as it now stands. This house seats a few less than a thousand, including both balcony and main floor. Mr. Brown is living temporarily on the second floor apartment over the theatre.”