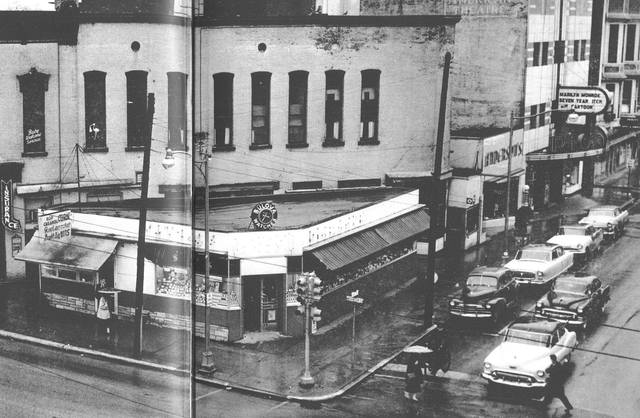 Located on Fifth Street at Washington Street. Built in early 1906 as a Knights of Pythias building. The Orpheum Theatre was opened as a vaudeville theatre on September 3, 1906. In 1909 it was renamed Crystal Theatre. It was rebuilt in 1915 and a balcony was added. In the 1910’s it was renamed American Theatre. By 1939 it had been renamed Rio Theatre and was remodeled in a Streamline Moderne style.

The Rio Theatre was demolished in the 1980’s.

Another view of the old Evening Republican building at Fifth and Washington (please refer to the two prior postings from this morning). This is from the 1956 Columbus High School yearbook. The triangular shaped building in front of the Evening Republican building housed the Tasty Nut snack shop and Smith’s Jewelers. Eventually, Home Federal would purchase all the property, including Castle Hall (where the Rio Theater is shown), and demolish it all.

The Knights of Pythias Building, also known as Castle Hall, was built in 1905-1906. The project included an amusement hall on the ground floor at the rear of the three-story structure. This hall had a level floor and portable seats, and was intended to accommodate a variety of events including dances.

The building was dedicated in January, 1906, and on September 3 that year the amusement hall began operating as the Orpheum Theatre, the first vaudeville house in Columbus. Sometime after 1909, a new owner changed the name of the house to the Crystal Theatre. In 1915 the theater was rebuilt with a proper sloped floor, and a balcony was added. In the later 1910s the house was renamed again, becoming the American Theatre. It had been renamed the Rio Theatre by 1939, probably at the same time it was remodeled in a Streamline Modern style.

The original architect of the Knights of Pythias Building was Elmer E. Dunlap, but I’ve been unable to discover who designed the Crystal Theatre rebuilding of 1915 or the 1930s remodeling as the Rio.

Most of this information comes from various posts on the Historic Columbus Indiana Message Board, but the information is scattered over several pages, so I won’t link to all of them. Near the bottom of this page is a postcard showing the Knights of Pythias Building as it originally looked, and some patron reminiscences of the Rio Theatre can be found on this page.

I Heard There Is Another Theater In Columbus Called The New Era Theatre Which Operated When The Rio Theatre Is The Orpheum Theatre.

50sSNIPES: The New Era was one of several theaters to operate in Columbus during the early days of the movies. In addition to the New Era and the longer-lived Orpheum and Crump’s Theatre, the town had short-lived houses called the Nicklo, the Lyric, the Palace, the Airdome, and the Theatorium. The Nicklo (operating in 1907) and the Palace (listed in the 1914-1915 American Motion Picture Directory were both located in the Belvedere Block (home of the Belvedere Hotel) and might have been the same theater operating under different names, but the others all appear to have been separate houses.

I found information off of Newspapers.com if you are curious. Sometimes I go in random city one-by-one to see how many theatres or airdomes that they got at the time.