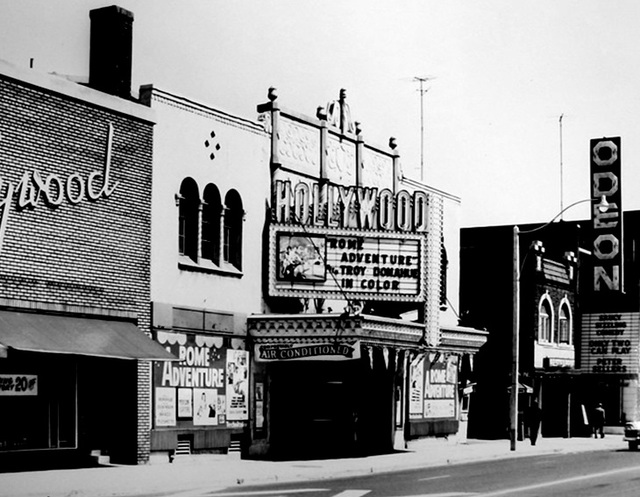 Famous Players operated this theatre, which they opened on October 27, 1930, and closed in 1999. At some point in its history, it was twinned, the two auditoriums designated north and south.

Here are three 1943 pictures of the Hollywood theatre in Toronto:

This theatre was owned by Premier Theatres (Allen Brothers)till 1970 when they sold it to Famous Players according to their website.

Actually the Hollywood was operated by Famous Players from about the mid 50s. It becamee one of their main theatres in the city. It actually wasn’t “twinned” in the normal sense, the first picture above showing the exterior is actually what would become the South Auditorium…the empty lot to the left of the theatre was added on to with a store at the front and the eventual North Auditorium behind it. Both cinemas would show the same film, the South all day and the North evenings only until 1966 when “Who’s Afraid of Virginia Woolf” was showing for many weeks so they decided to open up “Alfie” in the other cinema and it showed 2 different movies from then until it closed in 1999. In 1964/65, it had the long 10 month run of “Mary Poppins” and all summer before it opened in October of ‘64 the Hollywood was advertised as “Home of Mary Poppins”

In the mid 90s, Famous Players was considering adding screens to the Hollywood to make it more of a multiplex. But alas they built the Silvercity Yonge/Eglinton instead. In a way it would have been nice to re-devlop the Hollywood site because the Yonge/St Clair area would still have been considered an entertainment destination, especially with many new condo developments in the area. I still miss the Hollywood twins and the Odeon Hyland twins two doors down….it was always nice to go to that neighbourhood, see a movie and then walk around to the shops and restaurants.

Scroll down on this webpage to see a picture of the Hollywood in 1959.

The page for architect Herbert George Duerr at the Biographical Dictionary of Architects in Canada lists the Hollywood Theatre as a 1930 project, with an addition dated 1946. The 1946 design must have been for the 1947 twinning of the theater, which was noted in my previous comment on this house, January 7, 2009.

I worked at the Hollywood for several years starting in the summer of 1974 and I can attest that the South Auditorium was the larger of the two…it had almost exactly 800 seats. The North was indeed 690.