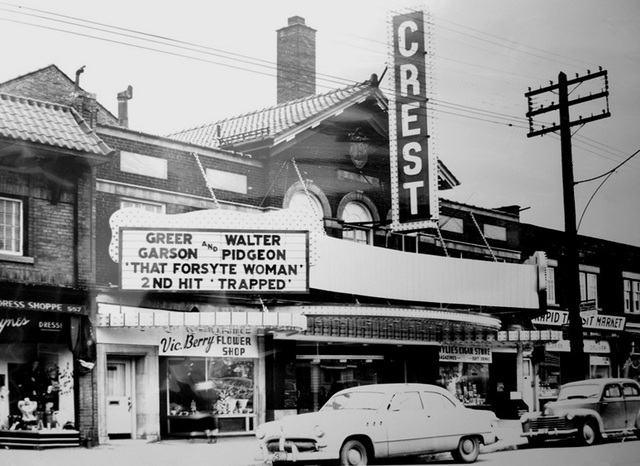 Originally opened as the Belsize Theatre in 1927 with a seating capacity of 968. It was operated by Famous Players for many years. In 1954 it was renamed Crest Theatre and in 1988 it became the Regent Theatre.

This theatre was saved from becoming a banquet hall by three young men involved in the film industry. The theatre now houses post production (film editing, sound mixing) for independent films during the day and shows current release films in the evening. It is capable of screening 70mm 6 track, 35mm SRD and Hi-Def D-Cinema.

The theatre was named the Crest for many years and owned by the person who also owned the Mt. Pleasant theatre about one block south of the Crest. Both the Crest and the Mt. Pleasant theatres were leased to Viacom’s Famous Players chain for a number of years. It was during this time period that the Crest was renamed the Regent and the theatre was also twinned. The second screen was installed in the balcony. I believe the original owners again operated both theatres after the Famous Players arrangement lapsed. Immediately after the Famous Players arrangement, the now named Regent tried stage productions briefly but soon reverted back to movies. The two theatres operated for many years mostly showing 2nd run semi-mainstream movies.
Prior the the theatres becoming under the Famous Players' helm, I attended both theatres several times. The Crest (Regent) was significantly larger and nicer than the Mt. Pleasant. Sometimes, but not always, the management would let you watch the movie in the officially closed balcony. During this time period the Crest (Regent) had probably a seating capacity of 1200+.

After about a twenty year hiatus, I returned to the Regent on August 20, 2004. The film showing was “Door In The Floor”. The acting was superb but the film was definitely weird. I understand it was based upon a short story by John Irving which accounts for its strangeness.
Much of the original interior of the Regent remains intact and its installation of wider seats and diminished rows provide all the comfort of the newer theatres while the retaining the charm and atmosphere of older theatres. Its 40'+ screen which is both draped and curtained also add to the movie experience. The theatre’s sound quality is unsurpassed. This is the result of part of the theatre being rented to the post production film company. I was told by the theatre’s manager that technicians from Dolby visit the facility quarterly to make sure everything is perfect for the production company.
Despite severe parking problems, I’d boldly state that currently the Regent is probably the best operating theatre in Toronto to see a motion picture.
The now called Regent opened in 1927 and has undergone 3 name changes since then. The opening name was the Belsize. In 1950. the Belsize was renamed the Crest and in 1986, the Crest became the Regent.

Richard G: I second your comments about this theatre. After watching Blade Runner: the Final Cut at the Regent recently I can confirm that this cinema is by far the best movie house in the city of Toronto. The projection was perfect with the picture in true focus from one side of the screen to the other. And the multi-channel sound reproduction was a revelation. This theatre has a quality of presentation that I tried to achieve when I operated the Roxy rep cinema in Toronto in the mid 70’s to 80’s. I had a limited budget to work with – but I came close.

Here is an illustrated article in Boxoffice of January 13, 1969, about the 1968 remodeling of the Crest by Famous Players. Apparently little of the original interior of the Belsize remains.

Peter Sorok has owned and operated the Mt. Pleasant and the Regent for a number of years. The Belsize was originally a partnership between Famous Players and an individual who also owned The Park Theatre on North Yonge!!

Full history with photos in below link.