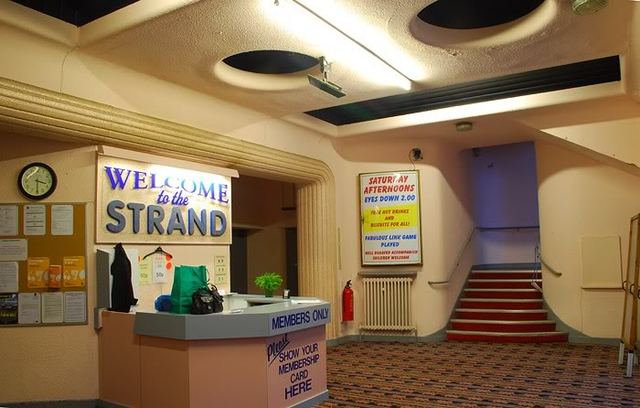 Located in the small Nottinghamshire town of Market Warsop to the north east of Mansfield. Plans were drawn by Mansfield based architectural firm Vallance & Westwick in November 1927 for this cinema which had a Neo-Classical style façade. However, there were delays (reasons unknown) and the plans were revised in July/August 1936 which had a more modern façade. The Strand Cinema opened in 1937. It was independently operated by the Warsop Theatre Co. Ltd. The Strand Cinema closed in 1961 and became the Strand Bingo Club. The building has a façade of hand-made brick, with a central stone feature. Inside the auditorium there is a curved proscenium, and the building is little altered from its opening.

In March 2011, an application was lodged to demolish the building and build a Tesco supermarket on the site, however in July 2011, the application was withdrawn due to local objections. The Strand Bingo Club was closed on 17th October 2011 when the lease ran out. By 2015 a new application to demolish and build a supermarket has been approved, and the building stood until January 2021 when a small piece dislodge off the façade and the local council issued an immediate ‘dangerous building’ notice and it was immediately demolished.

The design of this cinema is almost perfect to its function, with no waste, simply exactly what is needed for 780 people to watch a film, go to the toilet and buy an ice cream. The interior streamline modern design is just enough to create the sense of occasion and value without going over the top. The amazing facade however is testament to the fact builder / operator were the same and the frontage is as much a show of the builders skill and craftsmanship (Eastwood & Sons) as it is a cinema frontage. Current plans are to demolish the auditorium for a supermarket but retaining the facade, although there is some who want it all demolished because they do not like the look of it!

If this building was transported to a ‘hip’ location in London, they’d be clambering to have it re-opened for films or as a cultural centre. Alas, Lincolnshire is a cultural backwater I fear….