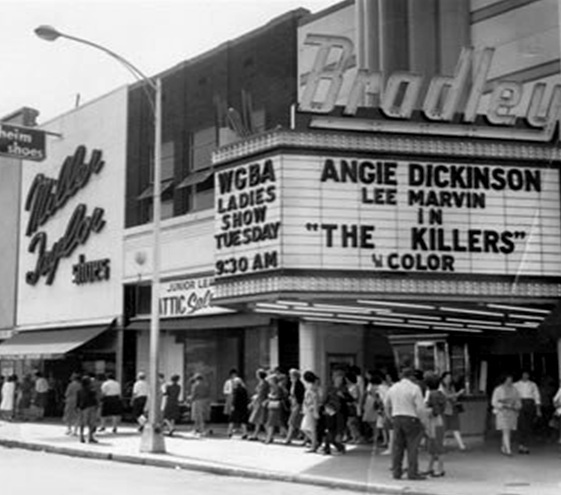 The Bradley Theatre opened July 2, 1940 with Adolph Menjou in “Turnabout”. It was equipped with a Hammond organ which was opened by organist Homer Knowles from the Fox Theatre, Atlanta. It closed as a movie theatre in 1977. Last used as a live theatre, by late-2010, it was closed, the owners are maintaining the empty building, but have no current plans for the use of it.

I was in Columbus on June 1, 2008 and the Bradley Theatre appears to be closed now. Photos here: View link

In October of 2008 I was allowed inside the Bradley Theatre. It is owned by the W.C. Bradley Company, the same company that built the theatre for Paramount Theatres in 1940. They purchased it in 1985 from Plitt theatres for $130,000.00. The building is valued at one million. The theatre is not being used, but is kept in repair by the Bradley Company. It is still a beautiful theatre. The box office has been removed and was probably destroyed around 1980. After it quit showing movies, the seats were removed from the main floor and it was terraced for tables on 4 levels. It was used as a teen center for a while and that pooped out. Fortunantley nothing was destroyed; however, the water fountain located in the tiled recess on the mezzaine level was replaced with a sink. A 2nd snack bar was installed in front of it. The balcony is in perfect condition with recent model seats. I was told that the balcony was split and 2 theatres were installed. I don’t know how they done this because nothing is damaged or altered. The lobby has walnut panels with floor to ceiling mirrors. There are 2 sets of 3 poster cases on each side. Nothing remains in the old projection booth. it appears to have been redone to accomadate digital or video projection. The Bradley company does not have any plans for it at this time, but they are keeping the utilities on and it has an alarm system. The marquee is beautiful and in excellent conditon. One unusual fine was that the poster cases located on the outside foyer have two sets of hinges. One set is for the poster case and the other set goes to a large section which contains the poster case. May have been closets to store marquee letters, etc.

Does anyone know what happened to large mirror that hung in the lobby of the theater? It was moved when i was a kid and hung in the stairwell of the original bradley museum but was moved back to the theater when it opened as a teen center in around 1987. I remember seeing it then. Last time i was in there probably around 2003, i noticed it was replaced by a regular mirror and a bar is in front of it. The original had a tree limb with birds and one was a snake bird i think they call it. Just always thought it was a cool mirror.

I don’t think the Bradley was ever operated by Georgia Theatre Company. The Bradley was built for Paramount Theatres, The last owner was Plitt Theatres, a successor to Paramount. The Bradley Company purchased the theatre from Plitt Theatres. It may have been operated by Martin Theatres at one time since Columbus was headquarters for Martin Theatres (now Carmike). The Rialto, located 2 door up the street, was used as a warehouse for Carmike for many years and is now being restored by an individual.

Does anyone remember the free shows? 6 RC cola bottle caps to get in. My brothers and sister and all my cousins would hit every soda machine during the week to get our bottle caps so that we could go to the movies on Saturday. They would show great movies and cartoons. They also had the dance contest before the show I have to admit I would win the 1st place prize almost every Saturday.I have fond memories of that place.

With the rapid growth of downtown Columbus, particularly the downtown campus of Columbus State University, these theaters should be brought back to life! They’re walking distance to thousands of students, and close to all the new restaurants and hotels!

Chickpea…I lived in Columbus from 1959-1969. I also remember collecting RC bottle caps for 2 reasons. One was for the Atlanta Braves. They had player pictures under the caps. I seem to remember mailing in completed sets for Braves tickets and also for Saturday morning movie tickets at the Bradley.

When I would visit my grandparents some time my dad would tke us to this theater to see movies.