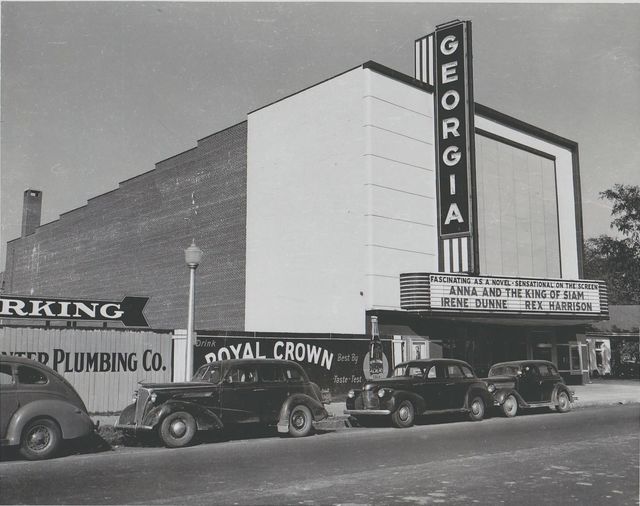 The Georgia Theatre was opened on June 6, 1946 with Olivia DeHavilland in “To Eash His Own”. Seating was listed at 1,168. It was owned and operated by the Georgia Theatre Co. until 1961 when Martin Theatres took over ownership.

The Georgia Theatre closed in 1980 and has since been demolished.

I can’t believe that so few people responded to the memory of the Beautiful Georgia Theater ! I have many fond (good) memories of working for Martin Theatres 1965-66.( Georgia Theater ) Many of my thoughts are drawn to old and deceased friends that ( I ) had the pleasure of meeting,knowing,working with,and learning what friendship was about. Just to mention a few names ( Gary Jones- Earl Kinsman- Darryl McFarland-Wanda Bunting?-Edwin White-and many others that their faces I remember but names I can’t remember at this moment.
If any of you read this ,you might remember me. My name is James ( Hersheybar ) Hurst ! I was the Head Doorman ( about the same as assistant mgr now ).
My mgr was MR. ARTHUR SWEATT ! A short man in statue but a true giant in kindness. He taught me that Love,Respect,and Honor can make any person happy regardless of color,sex,statue,origin,or age !

Additionally,I must add that my favorite saga ( series ) movie is 007 James Bond! (1960’s) Sean Connery blistered the screen with acting unmatched at that time. The film was full of color,realism,intrigue and acting that keeps you wanting more.

We welcomed many of thousands of ticket holders at the door during the showings. With every new series opening the line formed clear around the block.
With always fresh popped in front of eyes popcorn,cold drinks,and the best candies you would wish the movie would last all day.
We had great concession girls too! Their smiles were real and almost as sweet as the candy. Next time I will tell about Elvis Presley ( Frankie And Johnny ) and the Steamboat Float we ( mostly by Mr. Pretty-artist) built and drove around town. GREAT MOVIES don’t come around often so when they do , you know what to do !

James any way to add some pictures and maybe flesh out some of the old Drive-ins in Columbus that i put on CT . Sure you can add much more than i could living in Augusta!

At the Georgia Theater,late 50s early 60s. On Saturdays you could get in with soft drink bottle caps. Which drink was this,Coke,RC,Pepsi. Thank you in advance for any information.

From James hurst THE GREAT GEORGIA THEATER IN COLUMBUS GA WAS OWNED BY ONE OF THE BEST FAMILIES IN COLUMBUS GA.( ROY MARTIN ) THEY CARED SO VERY MUCH ABOUT THE PEOPLE AND INTERTAINMENT IN THE COLUMBUS GA/PHENIX CITY AL AND ATLANTA GA AREA. MEMORY OF THE FAMILY IS RECORDED THROUGHOUT THE CITIES. MARTIN THEATERS WERE SOLD TO FUQUA CO . LATER TO CARMIKE CINEMAS. THEIR HEADQUARTERS ARE HERE IN COLUMBUS GA AND ARE CONTINUEING THE LEGACY OF PROVIDING US WITH OUTSTANDING MOVIE THEATERS AND WONDERFUL MOVIES. COME AND VISIT THE CARMIKE HEADQUARTERS . LET THEM KNOW IN ADVANCE. I AM SURE YOU WOULD BE WELCOMED! YOU COULD GAIN A LOT HISTORICAL KNOWLEDGE ABOUT THE CITY AND MOVIE HISTORY. James hurst phenix city al

Good Stories, you guys from Columbus are going to have to do what I did in Augusta is get more history on here before it is lost as memtioned above.

The last film shown at this theater was “Penitentiary,” with Leon Isaac Kennedy. I remember driving by this theater soon after it closed. The building was being gutted.

1946 photo added courtesy of the AmeriCar The Beautiful Facebook page.

I think this was the theater where I saw beneath the planet of the apes in 70 when I had visited my grandparents, who now had lived in Columbus Georgia. The size and shape of the theater looked exactly the way it looked inside.