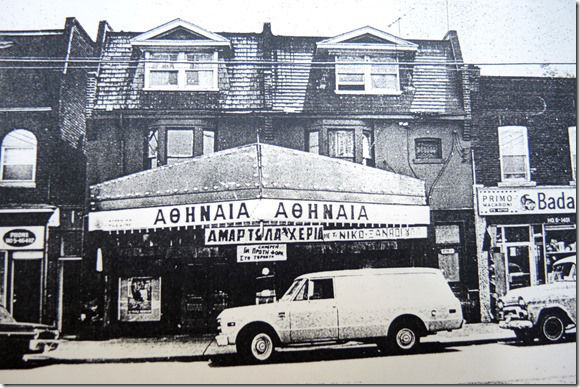 This was a neighborhood theatre from approximately 1913 to 1964. It then took on a succession of names and may have endured periods of closure.

It became the Athenian Theatre soon after its initial closure. Sometime after 1970, it became the Wellington Theatre, and then, according to various local business directories, the Sri Lakshmi, and then the the Gerrard Cinema or Gerrard Theatre, depending on the local source. It showed Tamil movies, consistent with the current ethnic character of the neighborhood.

In July 2011, it came under new owners and was renamed Projection Booth. Programs consisted of art, schlock, foreign and independent movies. It was closed at the end of 2014. It reopened on April 1, 2019 as the Grand Gerrard Theatre, presenting independent films and live performances.

A 2009 article on the Gerrard:
View link

It has been announced that, starting Feb. 1st, 2013, there will be a name change to Big Picture Cinemas. The new website URL is http://www.bigpicturecinema.com/

The two locations will be known as Big Picture Gerrard (the address noted above) and Big Picture Metro, the old Metro Theatre. Not clear yet whether there will be another attempt to introduce mainstream programming into the Metro, whose Cinema Treasures listing is here: http://cinematreasures.org/theaters/896

Article about a conflict between the owners of the cinema: