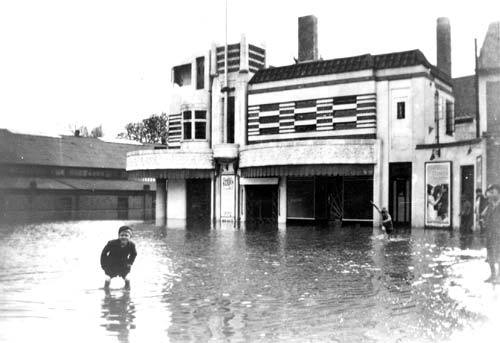 The Regal Cinema opened on 14th September 1931 with Owen Nares in "The Middle Watch". Designed by architect Horace G. Bradley of Birmingham, externally it was given an Art Deco style. There were two entrances, one on Dormer Place and another for the rear seats on Portland Place. The original seating capacity was for 1,305 on a stadium plan, with a raised stepped section at the rear, rather than an overhanging balcony. The proscenium was 45 feet wide and on each side of its opening were two back-lit, coloured glass, surreal style dragons, adding to the Oriental style of the auditorium. The Regal Cinema was equipped with a Barbieri 3Manual/6Rank organ which was opened by Frederick Jukes. It is thought that this was the only British cinema installation of this Italian made instrument. The organ was removed in 1955 when CinemaScope was installed. An additional facility was a cafe, located in the foyer. In November 1936, the Regal Cinema was taken over by the Stratford Picture House Co. Ltd. they were part of the Clifton Cinemas chain.

The Regal Cinema was equipped for 70mm presentations in December 1969, re-opening with Ron Moody in "Oliver". It was at this time that the main entrance on Dormer Place was removed and an office building erected in its place, a new entrance was built on Augusta Place and the former rear seating entrance on Portland Place was bricked up and subsequently demolished.

In January 1993, Apollo Leisure Ltd. purchased the Regal Cinema and they submitted plans to to create a new screen out of the 1969-built office space. This opened on 19th April 1996 with 144 seats. The original main auditorium was tripled in July 1996, with two screens converted from the sides of the raised stepped area and the other using the former front stalls and these three screens were served from the original projection box. In 2000, two additional screens were built by expanding out into the car park. Seating capacities in the 6-screens are now: 286, 174, 117, 96, 116 and 109. In 2014 it was taken over by Vue.

I have now loaded the picture of the Stage area before the 70mm conversion..

I’ve uploaded photos of Peter Lee’s models of this cinema (the original cinema and the Apollo addition). These were on display, with models of the Regal, Minehead, and the Playhouse, Beverley, during the visit by the Cinema Theatre Association in July 2000.

Second screen of the conversion project was opened by Anne Diamond on 16 December 1994. “Miracle on 34th Street” and “Junior” were the two films shown that day.

popcorn pete Do not remember Anne Diamond I was Invited along with Joyce Rabbits as part of the old Circuit Management The second Screen was built on the old office area where we used to work.. We watched “Miracle on 34th Street” I would like to see the modal of our former Regal Minehead

For Mike Blakemore an image of the press cutting for this is attached as a photo. The April 1996 date given in the overview is likely a closure date for conversion to four screens which it became from 12 July 1996. A few other notes is that a time capsule was placed in the building in October 1994. Also at the time of the takeover in 1993 the cinemas major stakeholder was facing a murder charge on the Isle of Man where he lived at the time. A fire took hold in the building in April 2000 which distrupted operations for several weeks.

Yes I remember that time.. I was very annoyed I was supposed to have had first dibs on buying the Regal. It went for peanuts.. He ended up with aggravated manslaughter and serviced five years. The Accountant tried stopping him committing suicide. but the accountant in the strudel got the blast from the shot gun. The MD lived with continual pain until his death.. If my family had taken over. I would still be doing some work and not retired as I am now. Its funny Apollo suffered Flooding and Fire.. They removed our flood precautions. We warned them ..

The company the purchased the Bath Company assets was “The Stratford Picture House Company Ltd., which was associated with Clifton Management. Sidney Clift only had 10% stake in the company which was why it survived. The Birmingham accountants Harold Brown. Solicitor Howard Baker (also Ranks Midland Legal Man). Dr Rowe and Ken Jones Snr were the main owners Having Sir Sidney Clift on the board gave the Theatre booking power. On the big fall out 1962 Those cinemas with this ownership configuration joined up with the BT Davis Group of Cinemas to form Theatre Administration Ltd.,

I was Apollo’s first General Manager at Leamington Spa and ran the Cinema for fourteen years. Taking the concept from a single screen through to six. Witnessing first-hand the fire and the floods. I can confirm Anne Diamond visited many times and so did Adam Woodyatt from EastEnders. The time capsule was placed by TV news Presenter Femi Oke and contained a radio tape from BBC CWR, a Television script from Central TV, an admission ticket from the day and a few memorabilia bits and bobs that the staff collated at the time that went into the film can. Apollo Cinemas as a company (sadly, now ceased trading) was eventually sold to VUE

I have also posted a couple more pictures, if you zoom in close on the 75th Anniversary pictures you will see the time capsule film can being placed by yours truly and Femi