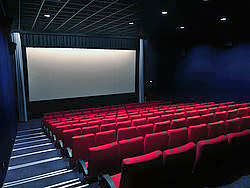 Built as an extension to the already existing Rundkino (today the Cinemagnum), this 14 screen multiplex had a seating capacity of 4,700 and was designed in 1996-1998 by the Viennese based architectural firm Coop Himmelb.

It opened on 26th March 1998 as the Ufa-Palast. In 1999 it was awarded an Architecture award for its building design. Today (in 2008) the operation has been scaled-down with only screens numbered 8-15 in operation, the remainder have (I believe) been mothballed or maybe been incorporated into the existing screens?

Guided tours of the building can be made with prior arrangement with the management.