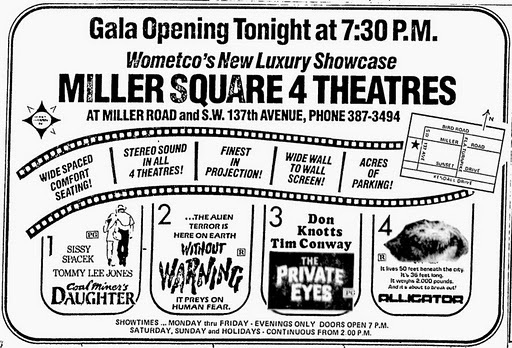 Opened by Wometco on November 14, 1980 as a quad. On July 18, 1986 this successful neighborhood theatres became an eight-plex by splitting the screens. Cobb Theatres closed it in 1997.

I ran this location as a dollar cinema for Regal Cinemas sometime in 1998. We had woooden platters at this location!

Mapping the address it comes up as an LA Fitness now, like several other cinemas in suburban Miami-Dade County that became gyms/fitness centers: Valentino, Kendall Town and Country, Kendall 9 (at one time I believe), IMAX Theatre at Sunset Place…

Maybe this bothers me because I don’t relate to exercise culture. : )

I had visited the Miller Square once in the late 90’s but don’t remember what movie I saw. It was second run and I think I left early because I was not enjoying it and the place felt run down. It closed a year or so later.

I walked by on 4/21/19 for the first time in 20 years and found the LA Fitness in the back of the shopping center down a walkway of storefronts that seemed originally placed to lead up to the cinema and make it feel like the centerpiece of the strip mall.

In my vague recollections I thought the cinema was located closer to a road, like maybe where El Dorado Furniture (13714) is now, but I’m probably misremembering.