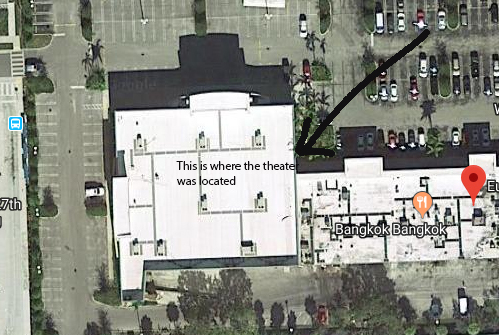 This independent twin theatre was added to the thriving Kendall residential area, opening on June 25, 1976. It was briefly run by Southland Cinemas and closed in 1989 when the Wometco Kendall 9 opened.

Does anyone know exactly where in the Shops of Kendall shopping center this theater was located? If the building is still there, what businesses occupy the space now? Thanks.

Wow kflmiami420, thanks for uploading the overhead shot of the former location, and for responding within a couple days after I posted my question! (And you created a CT account just to do that. : ) )

The spot you indicate was until recently an h.h. gregg store that to me looks like new construction compared to what it was up until a few years ago, so the part of the strip mall that housed the cinema may be gone.

In Google Street View if you approach the location (h.h. gregg) from SW 127th Avenue along SW 89th Terrace to the crosswalk in the upper left corner of your photo then set the image to show 2011, on that corner used to be a store called Divers Den (at what used to be 12614 SW 88th Street) in a building that matched the rest of the strip mall. Behind that was Creative Children Therapy in a portion with a higher ceiling like it may have been the former cinema’s auditoriums (even if the front entrance was not on that side).

Hmm, all those times I visited the Kendall Bookshelf used book store that used to exist in the Shops of Kendall and I never knew there had been a cinema in that shopping center.

I’d be interested in more information and stories from anyone about this theater.

This thread is a little old, but adding a comment anyway. I saw the first Star Wars movie at that theatre. And I think also The Omen. It was a nice theater – fun times in the mid-70s. :) I thought I was mis-remembering the location or even its existence – since it’s not there anymore. Googled the question and was led to this website. Thank you!