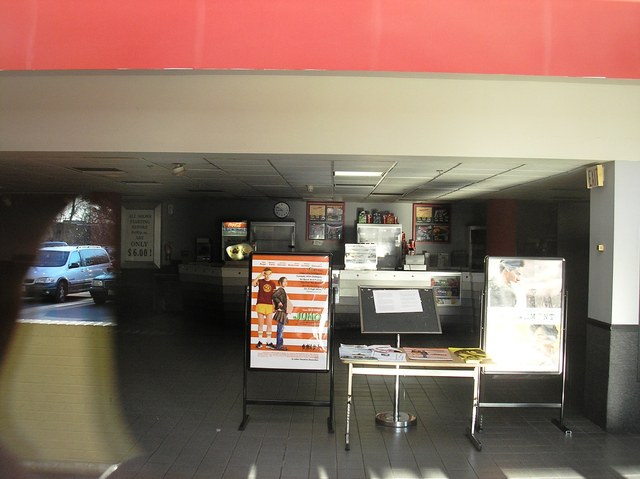 This cinema is up and running again as the Montgomery Royal Theatre (MRT). The short lived cinema and drafthouse concept has been abandoned and conventional theatre seating has been restored to each of the six auditoria (no word as to what the other four auditoria will be used for. The MRT is an independent operation showing first run films a few bucks less than the major chains.

Jack, Can you help me.Back in the early 70’s i spent a few weeks in Wheaton and would go to a twin theatre called i think the ASPEN HILLS Twin Theatre does that sense. I am hoping you might be a native there and remember movies there in the 70’s. i saw “OMEGA MAN” there among others, Thanks.

Thank you Jack Coursey.i left a post on another Wheaton area theatre about the Aspen Hill Twin months ago trying to find it, thanks for the time. I also went to a drive in around there called the QUEENS DRIVE-In or something like that,Does that ring a bell since i have you on CT figured i would ask.

Are you referring to the Queens Chapel Drive-In in Hyattsville? This venue was demolished in the late 1980s and is now part of the Hyattsville Metro Station.

Jack, I bet that is it. It looked pretty new from what I can remember. I will Check it out.

The status and name should be open as Jack states above as the Montgomery Royal Theater. It is a six screener. The other five theaters are bordered up.

I attended a showing of the disappointing remake of “Death at a Funeral” in number six for about $9.75. The staff are very friendly as I was graciously greeted and thanked for coming! Now what theater actually thanks you for coming to their theater as you are exiting anymore? Presentation left much to be desired. The scratched up picture went off the screen but was loud with no noticeable surrounds despite the presence of speakers throughout. Being an independent theater, I decided to purchase food from the concession stand, which serves your typical movie fare snacks; nachos, popcorn, soda, etc. I got the nachos, which were individually prepared in a tray, not the usual 50c bagged ones you get at BowTie, Regal and AMC.

The place has not changed much since I recall this place opening up as a Roth venue boasting Kintek stereo sound back in ….‘87? I remember seeing “Batteries Not Included” and enjoying the surround effects of the little space ships zooming in front of and around you.

Given the Indian management (maybe ownership) perhaps Bollywood films will get booked here. There is a decent Asian indian populous in Montgomery County and this location would be a good draw for the latest Bollywood releases. Perhaps the concession fare will improve with Indian goodies such as samosas and lassis. While this place is not my first choice for seeing movies, I’ll definitely come back.

This venue should be updated to OPEN under Montgomery Royal Theaters name/management. Their website is the same .com. Looks like they lowered their adult evening prices since I was last there by $1.

Noticed that AMC is now trying their hand at making a go of this venue. Of the recent photos I have seen, it appears that AMC just made some cosmetic changes to the existing structure rather than building from the ground up.