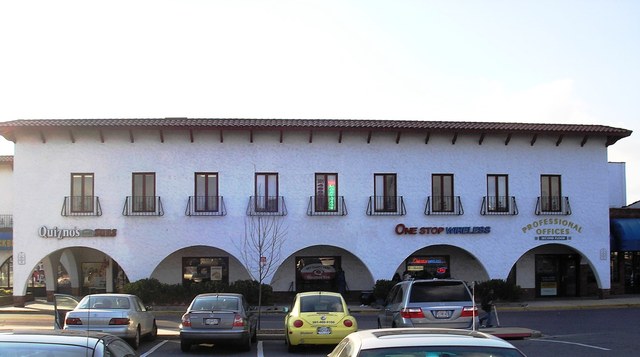 The Mercado Theatre was part of the KB Theatre group between 1969 and 1985. The theatre was gutted some years ago and the building is currently used for offices and retail establishments.

It was never called anything but the Mercado Cinema. It opened in 1969 with “Krakatoa East of Java”, an opening evening in which everything went wrong and the film was stopped several times due to projection difficulties.(There seemed to be a pattern with this. Later during the showing of “The Hawaiians” the floor underneath the screen experienced water leaks from a storm and the exit door next to the screen was wide open flooding the lower screen with sunlight as the water pumps chugged merrily along). Still a great place for a cinema education, though at the time the theater often passed on blockbusters like “Airport” for cheaper bookings like “Girly” and “The Christine Jorgensen Story”. In the early first years, there were many interesting matinee offerings- “King Kong Escapes”, “The Phantom Tollbooth”, “The Sword and the Dragon” for 50 cents -and a good many midnight double features such as “The Comedy of Terrors” and “The Raven” or “The Dunwich Horror” with “The Oblong Box”, each double bill for a dollar. Some of the features playing there were “Funny Girl”, “2001: A Space Odyssey”, “The Landlord”, “Winning”, “On Her Majesty’s Secret Service”, “Vixen”, “Barbarella”, “Five Easy Pieces”, “The Private Life of Sherlock Holmes”, “Pieces of Dreams”, “They Call Me Mister Tibbs”, “Daddy’s Gone a Hunting”, “The Organization”, Hang Em High", “True Grit”, “The Undefeated”, Chisum", “The Sterile Cuckoo”, “Fritz the Cat”, “Oh! Calcutta”, “Lovers and Other Strangers”, “Lady Sings the Blues”, “Superfly”, “Theater of Blood”, “The Hospital”, “I Walk the Line”, “Fantasia”, The Barefoot Executive", “Doctor Zhivago”, “Paint Your Wagon”, “It’s a Mad Mad Mad Mad World”, “Emperor of the North”, “Electra Glide in Blue”, “Summer of 42”, “House of Dark Shadows” and “The Fearless Vampire Killers” (double bill), “Pulp”,“Suppose They Gave a War and Nobody Came” (along which they played filmed highlights of the Ali- Frazier fight),“Getting Straight” and “Butch Cassidy and the Sundance Kid”. The theater was very heavy on United Artists bookings in the early years. It was a nicely banked theater with a very large screen with a lobby equipped a small concession stand, the rest rooms available by walking up a long staircase leading to an open air railed corridor that also led to the projection room and the manager’s office next door (which featured a large curtained window in which if one were fortunate, afforded a dynamite view of the screen- no balcony in this theater). As the name of the theater suggests, the motif was one of Spanish stucco as was the rest of the adjoining plaza.

The Mercado was the work of the architectural firm of MacDonald & Englhart with a seating capacity of 820.