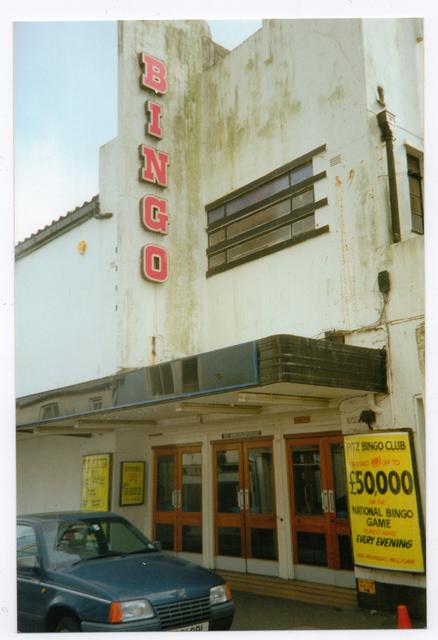 The Ritz Cinema opened on 27th July 1936. It was designed by architect A.H. Jones and was originally planned by the independent owners of the Pavillion Cinema in the town. However, before it was completed it was taken over by the Union Cinemas Ltd. chain.

There is a decorative fin-sign over the entrance and the auditorium runs parallel to the street. The 1,000 seat capacity was all on a single floor. There were decorative grilles on each side of the 40 feet wide proscenium opening. The Ritz Cinema was equipped with a Compton 2Manual/4Rank organ which had an illuminated console located on a lift in the orchestra pit. It was opened by noted organist Harold Ramsay. Union Cinemas were taken over by Associated British Cinemas(ABC) in October 1937.

The Ritz Cinema was taken over by Mecca Ltd. on 28th June 1965 and closed as a cinema on 17th July 1965. It was converted into a Mecca Bingo Club and remained in this use in later years as the Ritz Bingo Club, which closed in 2008. It then became a nightclub.

In December 2006, plans had been approved to demolish the building and construct housing on the site. Several arts events were held in the building, but it mainly lay empty and unused. In June 2013, it was purchased by Merlin Cinemas, who operate the towns' Savoy Cinema, and they are planning future use for the Ritz Cinema.

There seems to be a campaign to save the ritz.since the summer of 2008

There’s a brilliant website, with loads of pictures and information about the Ritz, here:

The Ritz Penzance has been brought by Merlin Cinemas (which also owns and runs the Savoy Cinema in Penzance). Merlin will work with the Ritz Community Centre Trust to find a viable use for the former Ritz Cinema.

As of August 2017 cinema remains boarded up, a local business says it was last in use as a nightclub.