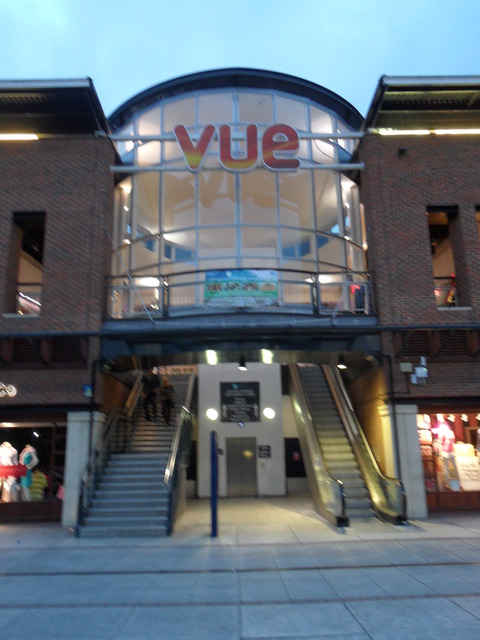 The 11-screen Warner Village opened in March 2001 with a seating capacity of 2,854. Later, 3 extra screens were added. In June 2006 it was acquired by Vue and re-branded.

Seating capacities in the screens range from 427, down to 153.

A fairly standard Warner Village multiplex of its time. Of the original 11 screens, the larger auditoria are good, fairly wide and with Scope screens while the smaller ones are fairly narrow, box like and with just 1.85 screens. All have stadium seating.

It opened in 2001 with 3 empty shells which later became screens 6, 7 and 8. Although relatively small, the auditoria are quite wide so have impressively large Scope screens.

Of the current 14 auditoria, there are now 7 Scope screens (Nos 2, 3, 4, 6, 7, 8 and 12) which have, or had, movable side masking. I am not sure if the masking is still in use; I rather think not and that it is permanently set out to Scope irrespective of the film showing.

Screens 2 and 4 were slightly unusual in their 35mm days as to go to Scope the top masking lowered a bit and the side masking went out a bit, a combination of the two. Now in digital, the 1.85 image is slightly smaller with the top masking permanently lowered, so going out to Scope just becomes the standard side expansion.