Per Orinda Theatre website, they are now putting on concerts (NOT a good look see UC in Berkeley for more information)

They’ve set up a Go Fund Me page too! 😔😔 That’s not reassuring either! With Cal and Oaks in Berkeley gone, local theaters are drying up! You talk about scraping the bottom of the barrel! Lamorinda is home to world famous St. Mary’s basketball team! YIU CAN DO BETTER THAN THIS PEOPLE! 🤬🤬

On a recent visit 5/1/2021 all the surround speakers are mostly turned off. Many of the speakers set hi up on the ceiling have blown out cones so they just turned them all off. Too bad hope they can get funding to put in better speakers or a Meyers sound system for the stereo surround system. People live in plus multi million dollars homes in Orinda and have fancy home movie theatres. So sad to go pay to see a movie in a great old deco 750 seat theatre like the Orinda and the sound does not work on the sides and back!

For many years the stereo surround sound in the large original Orinda Theatre has been turned way down as the former IA union projectionist did not care for people looking up when they heard effect surround speaker volume so he turned the ceiling/wall surround speakers way down. That projectionist is no longer in the booth so the volume has been turned back up like It was in the past. Hope they can re open soon so we can go and see this classic deco neon cinema with better sound at least in the large cinema space. Turn on the marquee neon and bring back the movie crowd! 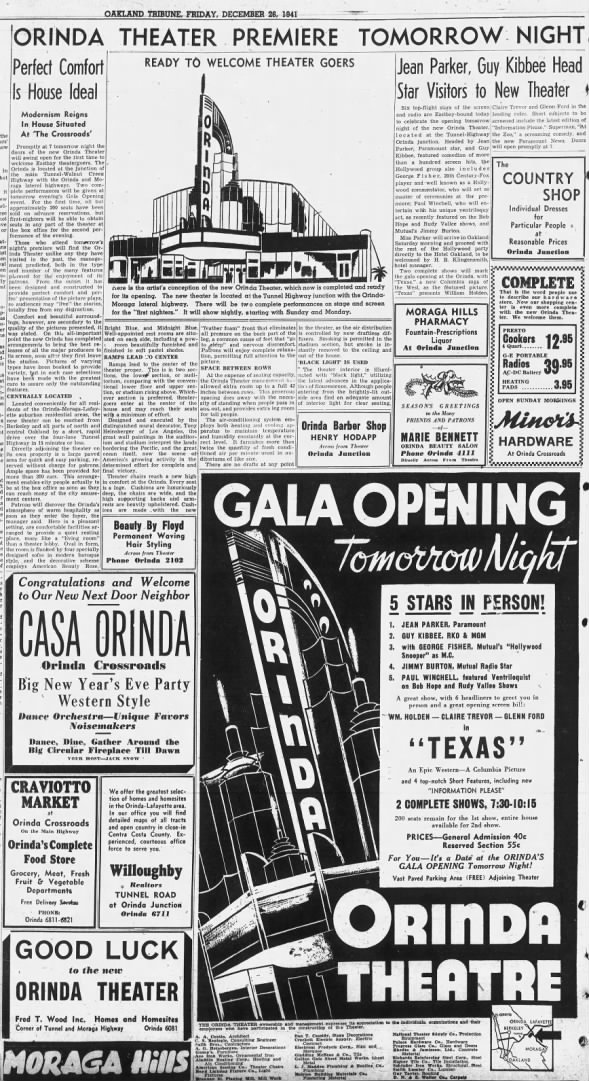 I remember seeing a double feature of AGAINST ALL ODDS and MOSCOW ON THE HUDSON here in… 1984. Preferred the Bridges film. A recent visit to the theater (July 2017) finds it still beautifully kept up.

Very nice. I lhave seen a long shot on fb of the lobby-excellent.

The address should be 2 Orinda Theater Square.

It is now the only theater left after the Rheem in nearby Moraga closes for good after tonight’s performances. My concern is will this theater be next??

My understanding is that the hot greasy steam from a popcorn machine could potentialy damage the ceiling murial in the lobby. This is what I was told and it seems to make sense.

This was an EXCELLENT theatre under Renaissance Rialto / Alan Michaan. It’s hard for me to believe anyone would think otherwise.

The operation of the Orinda Theatre was taken over from Renaissance Rialto on May 8, 2009 by the group currently operating the neighboring Rheem Theatre in Moraga, CA. The new operators let about 80% of the staff go and also locked out the Union Projectionists.

For years RR said they couldn’t pop fresh popcorn at the theatre, and the new operators had a popcorn popper in place within 2 weeks of taking over. RR raised the General Admission ticket price to $10 while their largest and most lovely auditorium still lacks cupholders on the seats to this day. On the flip side, the new operators are just booking the same commerical first run films they have at the Rheem right up the road. I don’t understand why they are doubling up the same films right down the street from eachother, there aren’t that many people there. Its feeling like an election, you know the old guy sucked, but the new guy also sucks, just in different ways. Best of luck to the theatre, the real victim in all of this.

The Orinda marquee was briefly seen in a recent episode/montage of “Snapped”.
Utilizing the marquee’s in the various hometown’s of profiled murderesses, seems to be a pattern of “Snapped” producers/editors.
Especially when said theatre’s share the same names as the towns.

Here is a september 1967 ad from the Oakland Tribune:
http://tinyurl.com/2tt6gf

Once more—-Orinda should be listed as a “Triplex” and its seating capacity adjusted to include that of the two additional cinemas.

According to today’s San Francisco Chronicle, in an article about the closing of the Park Theater in Lafayette (also operated by Renaissance Rialto), it mentions that Rialto may give up on the Orinda when its lease is up a year from now. Not good news. (The Park Theater listing on Cinema Treasures has a link to the article.)

I grew up in Orinda in the late 1960s and 1970s, so this was my primary movie cavern. At the time, the theater was growing a bit “long in the tooth” but the auditorium was very magical. It sounds as though the restoration was successful. The place really was starting to fall apart, but it was an enchanting plan to escape for this youngster and it became an integral part of growing up.

Though the Orinda was not physically split in the process of adding the two additional screens, it should probably be considered a “Triplex” and its seating capacity adjusted accordingly.

I grew up in Orindaâ€"and hated it, try being one of the lone Jews among the WASPS in the 70s, but at the theater, staring at the walls painted with long-haired women, soaring upwards against blue and starsâ€¦ I could forget for awhile.

The Orinda Theater opened on 27th December 1941 with a seating capacity of 834.