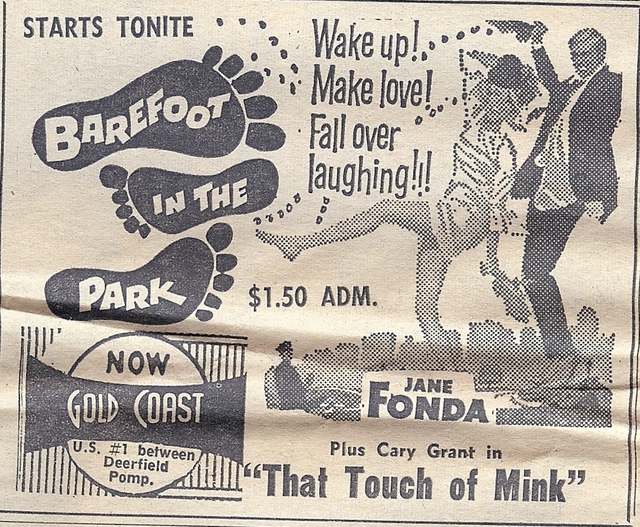 Two indoor "mini theaters" were carved out in the base of the drive-in screen by the early-1970’s (when the Ultra-Vision Twin opened nearby). Closed Thanksgiving weekend 1978 to make way for the Rivertowne Square shopping center which was built in 1979.

“Florida’s only triple theatre” — but not for too many years, nor possibly months.

Street view: This is where the Gold Coast entrance was once located. Box office and screen were about halfway into what is now Rivertowne Square’s parking lot.

A great old drive-in. I remember the mosquito coils they used to sell in the snack bar. Also still remember opening night of Jaws in 1975 when Chief Brody first saw the shark – the scene startled a kid so much he fell off the top of his parents' car and jolted my vehicle – my date & I weren’t prepared for such a multisensory experience at the drive-in. So much for looking cool in front of your date…

I remembered the Gold Coast drive-in, used to see Cheech and Chong movies there. It closed down in the 70s and became a hangout for kids before they tore it down. We built tree forts in the Australian pines, and ransacked the old buildings, nothing but bags of paper cups and popcorn butter mix left behind. It used to be the spot local kids would go to hide from the Deerfield cops when we skipped school. Tore it down to build the Winn-Dixie shopping center, we were so mad that they were destroying our hangout, several of us would go into the construction site every night with sledge hammers and axes to destroy what the construction workers had built each day. We were so effective in demolishing cinderblocks and insulation panels that the Deerfield Police Department had to post an officer there through the night to prevent the deconstruction havoc we wreaked every evening. :) The only thing that survived of the Gold Coast was a line of those tall pine trees that were left untouched, which may still survive even today.

I worked for South Florida Drive-in Theater Management Co. starting in 1973 at the LakeShore Drive-in in Margate starting in the snack bar for a high school job and working at various drive-ins during high school and college. Over those years I had worked at the Lakeshore, Thunderbird, Hiway/Airport, and Gold Coast Drive-in theaters.

I was the theater manager / projectionist for that last weekend at the Gold Coast in Thanksgiving, 1978. The main feature was Jaws 2 and the second feature was Gray Lady Down.

I always enjoyed working at the Gold Coast. I loved the big theater, the large screen, the relaxing & laid back atmosphere, the people working there, and talking to all the regulars that came in to watch movies up to the very end. Walking into that snack bar always felt like traveling back in time to the 50s and 60s. I just had that kind of feel to it!

The owners really tried to make it profitable. They tried to add two more outdoor screens and bring the Swap Shop to it but could not get permits approved by the city to do so. Sadly they had to sell it as by 1978 as the land was valuable and it just wasn’t profitable to run the drive-in there anymore.

So, on Sunday night, 11/26/78, without any fuss or fanfare and without any press coverage or goodbye celebration I closed down the Gold Cost for the last time. While the last movie was playing I took down the movie names on the marquee & replaced it with the word “CLOSED” on both sides. I then waited for that final movie to finish, got on the PA system to announce that the movie was over & thank everyone for coming to watch the movies tonight (as I always did), and watched patiently as all cars left. I then slowly shut down the projection booth, turned off the big old tube amplifier along with all the lights, walked down the stairs & around the snack bar to the middle of the theater, took one final look around taking it all in one last time, and said a quiet “Goodbye”. I then walk back to my car parked next to the snack bar, got in, and drove out of the theater past the big screen for the last time.

I really do miss the Gold Coast Drive-in. Over 35 years later after I closed it down for the final time, I still have many fond memories of big old beautiful drive-in theater.

Do you know anything about the mini cinemas added in the early late 60’s? In particular, where were they located and what projection system was used?

This opened on March 23rd, 1956. Grand opening ad in the photo section.