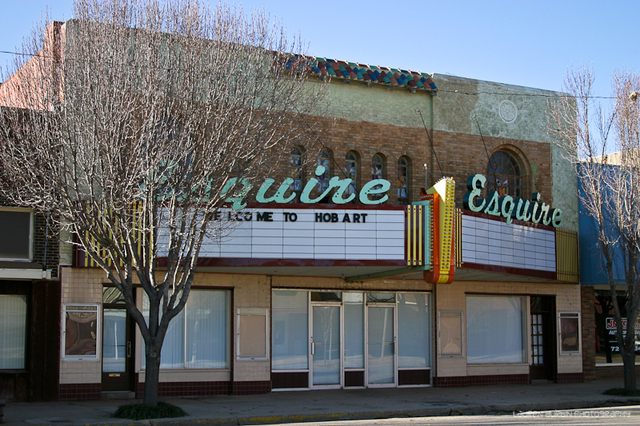 Opened around 1930 as the Rialto Theatre. By 1936 it had been renamed Kiowa Theatre. Listed in editions of Film Daily Yearbook from at least 1941 through to 1950 and beyond as the Kiowa Theater (sometimes spelt Kiawo Theater).

My wife and I visited The Esquire this past summer. It looks like a bomb went off inside it! It’s completely gutted! The only thing left is its marquis. I attended this theatre when I was a child, and its current state is truly disheartening. What a waste!

Another Hobart theatre, the OKLAHOMAN, is mentioned in the following link about stage scenery supply companies-
http://digital.lib.umn.edu/scenery/index.html

To view 1936 exterior photo of the Esquire Theatre, when it was still known as Kiowa, enter site below, type in word “theatre”, then enter. Images of the Oklahoman Theatre will also pop up.
View link

After looking at interior/exterior photos I can’t help but wonder if Harold Gemino was architect of this cinema. The facade and rustic, exposed beam auditorium are so similar to his Sooner Theatre, Norman, OK.

Notice how the Kiowas marquee touts “Western Electric Sound”, which translate to “sound on film.” My grampy told me how quickly moviegoers tired of Vitaphone disk sound, and alert theatre owners began to ballyhoo sound on film systems.

Here is a close shot of the marquee:
http://tinyurl.com/yh557p9

The NRHP Registration Form for the Hobart Downtown Historic District says that this house opened around 1930 as the Rialto Theatre. The timing, and the size of the building, suggest that it was this project noted in the April 10, 1929, issue of Motion Picture News:

“Bids were closed August 6 on the construction of a new theatre at Hobart, Okla., for the Griffith Amusement Co. of Oklahoma City. The plans call for a one story, basement, balcony and mezzanine. The building will be 50 by 150 feet. Harold Gimeno of Norman, Okla., is the architect.”

The Esquire building bears a very strong resemblance to the Sooner Theatre in Norman, also designed by Harold Gimeno.

Theaters went into decline, then returned to popularity. Unfortunate for small towns who did not have the population and the financial resilience to be returned to use. This theatre will be listed in the photo survey. John Wilson, Ph.D.