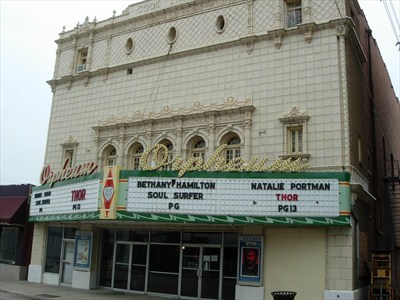 In the 50’s & 60’s auditorium main floor walls were lined with six Art Deco lighting fixtures identical to the one pictured here. Manager Ed Swallow would lamp these four-foot long fixtures to match the season. During cool winter months lighting colors were warm red, yellow, and orange. During hot summer seasons colors were cool blue and green.
My guess would be that these chandeliers were brought in from some other theatre.
http://www.robbender.com/gallery/broadway/P5234446

Video Theatres (and their predecessor, Griffith Theatres), used the same fixture that was in the Orpheum in several of their theatres.

Allowing for colorful versatility, these frosted fixtures seemed to be popular amoung theatre operators. This style of lighting is also found inside the Art Theatre (AKA-Park), Champaign, IL.
View link
and
View link

A 1984 photo of the Orpheum Theater showing “Temple of Doom” and “Sixteen Candles”.

The Orpheum, taken April 2009 – the very nice crew let me come in before they opened to take a look around. Magnificent place, a must-see if you’re in the area.
View link

Symco; If you really want to see exactly what the frosted glass sidelight fixtures looked like inside the Orpheum auditorium, then go to this site and type in word “Dixie”. Auditorium views for the Holdenville Dixie Theatre show the exact same sidewall fixtures. These fixtures were more fancy than those found inside the Art Theatre, Champaign, IL.
View link

Several sources have told me about an Orpheum doorman, named Jeff Chapman, who was the crush of all local junior high girls during the late 1960’s.
After college Jeff was house manager of the Sooner Theater in Norman, OK, where his charm earned him the same admiration as he had enjoyed in Okmulgee.

Sharp vintage interior/exteriors images of the Orpheum Theatre can be found on this nice web site,
http://www.roadsideoklahoma.com/node/581