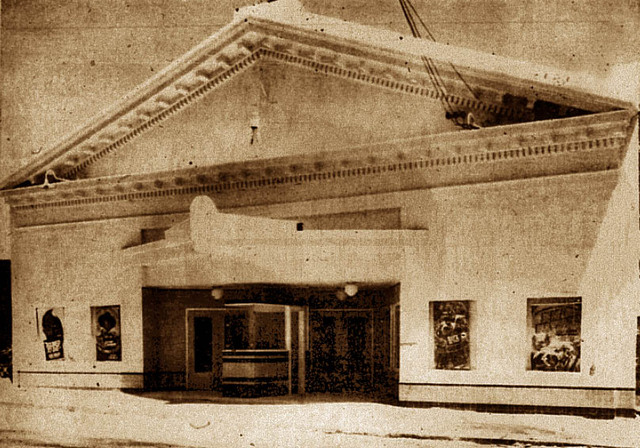 This theatre was located in the Point Richmond neighborhood of Richmond.

The building still stands. It is built of wood and has long been turned to other uses.

The Point Theatre was one of several houses in the bay area opened or re-opened by Robert Lippert during the early days of World War II. A letter from Lippert published in the September 12, 1942, issue of Motion Picture Herald had this paragraph about the Point:

“June 12th, I commenced remodeling of the old Point theatre at Richmond and installed a balcony to seat 100 and renovated the house from front to back. Total seats, 450. Opened this theatre August 15th.”

I haven’t been able to trace the theater prior to that, but the building looks quite old and could date from the 1910s. It’s possible that it operated under a different name earlier in its history. Richmond had a house called the Regent Theatre which was mentioned in the September 16, 1916, issue of The Moving Picture World. The Point building looks old enough to have been a theater in 1916. Perhaps someone can pin down a connection, as I’m coming up blank on this one.

Well, I don’t know how I missed John Rice’s page about the Point Theatre, which has the answers (and several good photos.) The Point Theatre was opened by Richard Tcherassy on February 14, 1913, and the building was designed by architect C. O. Clausen.

Robert Lippert renamed the house the V Theatre (for Victory,) and re-opened on August 4th, 1942. The remodeling for Lippert was designed by architect Vincent Raney. Post-war, the name Point Theatre was restored. The house opened and closed a few times after that, finally re-opening in the mid-1950s as the Ciné Theatre, a second-run, revival, and art house.

A thing I find remarkable is that the building’s Greek Revival pediment has survived all this time, little worse for wear. Plaster is unlikely to have held up so well, and there are no joints as one would expect in terra cotta, so it must be either wood (frequently used for exterior trim in the Bay Area even after more than half of San Francisco went up in flames in 1906) or cast iron.

The Regent Theatre of 1916 remains a mystery. It is not listed on the Lost Movie Theatres of Richmond web site, nor is a house called the MacDonald that was operating in 1929. There are still bits of Richmond’s theater history waiting to be discovered.

This 1913 theater building is still in use, now occupied by El Tunel, a bar and restaurant. A new entrance has been cut into the side of the former auditorium, and the restaurant uses a Park Place address. The interior shows no trace of its theatrical history.